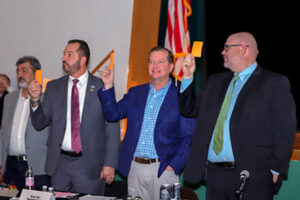 Special Town Meeting turned out to be an interesting night at Hopkinton Middle School on Dec. 9. Here are a few notes from the event:

— A moment of silence was held prior to the start for town employees who passed away since the last Town Meeting. Town moderator Thomas Garabedian called special attention to two individuals, longtime town volunteer Mary Pratt and former superintendent of schools Cathy McLeod.

Planning Board chair Muriel Kramer served on the Select Board with Pratt.

“Mary Pratt was a visionary with an incredible intellect and seemingly endless energy,” Kramer shared via email after the meeting. “She was an effective and dedicated public servant protecting the interests of Hopkinton locally and at the state level for over 50 years. Mary was the one who answered the call when it came in. She led by example and set the gold standard for all of us in the area of community service. Mary was an individual who saw what needed to be done and always looked to herself first — to define the issues, tackle the problems and craft solutions. Mary worked selflessly for Hopkinton, always keeping the needs of the entire community in the forefront; she worked not for herself but for the community as a whole. She saw the big picture often before the rest of us could get up to speed, and she jumped in advocating for action rarely taking no for an answer. She was smart, dedicated, capable and persistent.”

Pratt undoubtedly would have been pleased with the results of Special Town Meeting, especially the support for the schools.

“Mary was dedicated to environmental and conservation issues, honesty in government, and the welfare of her community,” Kramer added. “But education was perhaps her greatest passion. She knew that that the single best way to build a strong community was by focusing on excellence in education. Mary worked for decades to bolster our collective educational product, focusing on the spectrum of needs from advances in special education to STEM (science, technology, engineering and math) initiatives and on to enrichment opportunities for the most talented and gifted students. She appreciated that every investment across the spectrum of educational services was one that repaid society many times over, and she delighted in children and their pursuits.

“Winston Churchill once said, ‘We make a living by what we get, but we make a life by what we give.’ Mary left an incredible legacy with all that she gave. She will be missed.”

— It was exactly 10 p.m. when town clerk Connor Degan made a motion to cease debate and take a vote on Article 1, the Main Street Corridor Project. After polling the auditorium about whether residents wanted to end the public comment portion, Garabedian said he wanted to hear from the gymnasium — where about 200 residents were located after the auditorium reached capacity — so he asked for those individuals to respond. A few seconds of silence passed, so Garabedian moved on, not realizing there was a 20-second delay to the television feed in the gym. After Garabedian asked if there were any other procedural motions, a loud chorus of “ayes” rang out from the gym.

“That must have been an echo,” Garabedian joked.

— After the vote on Article 1, about a third of the people in the auditorium departed, and it was very noisy as superintendent Dr. Carol Cavanaugh waited to speak on Articles 2-5, concerning temporary additions to some school buildings to accommodate an influx of students.

Cavanaugh joked to the individual next to her, “Should I talk over these buffoons?” She added that was getting “punchy,” undoubtedly due to the late hour.

Well, the comment was picked up by the microphone and could be heard on the HCAM feed. The following morning., Cavanaugh issued an apology.

“[I] said something I should not have said,” she acknowledged in an email to the community. “While it was a flippant thing to say, I honestly meant nothing by it. And now, I cannot say how regretful I am that I uttered such an unkind term.

“To all of you, I am sorry. As the leader of your public schools, I should have exercised more patience and grace.”

The rest of the night went well for Cavanaugh, as all four school articles passed easily. Perhaps her most uncomfortable moment came during public discussion on the final school article, when resident Jeff Doherty chided the first-year superintendent for the fact that the middle school auditorium always gets too hot when there’s a crowd due to poor air ventilation — a longstanding complaint.

“Why is when we come into this auditorium that we cannot have proper ventilation?” he said, eliciting laughter from the audience, many of whom were fanning themselves with their voting cards. But Doherty was serious. “I graduated in the mid-’70s. I was up on that stage and performed, and they had the same problem. Can we do something about it? I’ve spoken about this at spring town meetings before. This is ridiculous, and you should be embarrassed.”

Department of Public Works director John Westerling provided an update on the long-delayed intersection improvement at Hayden Rowe and Chestnut Street, and it’s a familiar story.

The town again is waiting on Verizon to do its share of the work before the project can be completed.

According to Westerling, Verizon indicated it planned to handle its responsibility — relocating wires and poles — by Nov. 11. As of mid-December the company had yet to come through.

It’s a familiar refrain for a project that was started a full year ago. Cement barriers sit at the corner and fully operational lights sit atop the blinking ones that remain in use.

Once Verizon completes its work, the barriers can be moved while the town finishes up. However, now that we are into the winter season, further delays are likely.

Congratulations to the Hopkinton High School football team, which was awarded a Massachusetts Interscholastic Athletic Association Team Sportsmanship Award. The award is for “outstanding demonstrations of sportsmanship and respect during the football season.” Coach Dan MacLean and some of the assistant coaches and players represented the team and accepted the award during a presentation at Gillette Stadium on Dec. 6.