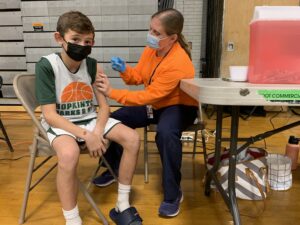 Looking for a word to describe this past year? It’s complicated.

The COVID-19 pandemic raged at the start of 2021, but by November vaccinated students at the high school were allowed to shed their masks, becoming the first public school students in the state to do so — against the advice of the town’s health director.

“I am on record as being against it,” Shaun McAuliffe said last week. “But at the end of they day, they managed to pull it off. They actually had two positive people show up to school. But we didn’t have any spread in the high school during the off-ramping.”

So, are we out of the woods, a community showing what can happen when people behave responsibly (for the most part)? No. Because while high schoolers attended classes with no masks, Elmwood School shut down a classroom due to a “super-spreader” event that McAuliffe said affected about 60 people. And the town overall has seen a spike in cases over the past few weeks.

Aside from the pandemic, the year’s top story was the tragic death of HHS sophomore Mikayla Miller in mid-April and the bizarre firestorm that followed.

Activists descended upon the town in May, hurling accusations that Hopkinton was racist and there was a cover-up to protect the white teenagers who “lynched” Miller, who was Black and gay. A Twitter poster threatened to burn down the town.

The Select Board called an emergency meeting and pleaded for a peaceful rally. Some businesses closed early, as did the schools, on the day of the event.

But then the rally’s leader said Hopkinton is not racist, because hundreds of residents had reached out to show support and showed up to the rally at the Town Common. The activists then focused their attention on the district attorney for what they claimed was a mishandled and biased investigation — although no evidence has emerged to refute the DA’s finding of a suicide. 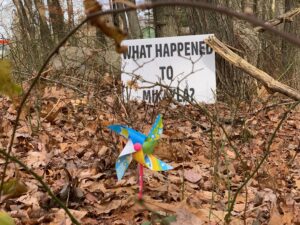 A sign remains in the woods just off Main Street, near where Mikayla Miller’s body was found in April. PHOTO/JERRY SPAR

During the rally, Miller’s heartbroken mother took a shot at Hopkinton’s designation as “America’s Safest City,” saying it’s only because many crimes are not reported by police.

One change the Police Department made following the teen’s death was to be more forthcoming with information. However, for the past month, following a change in software providers, the police log has been devoid of its usual details, making it unpublishable in this newspaper.

Last week I asked Police Chief Joseph Bennett what — if anything — we learned from the whole situation. “I’m going to have to think about that one and get back to you,” he said.

Our current top news story is the issue of PFAs (potentially hazardous manmade chemicals) in the town’s water supply. The town tested over the state limit for three straight months, meaning mitigation measures — which will cost hundreds of thousands of dollars — must be implemented.

Those in a sensitive subgroup — infants, pregnant women, nursing mothers, individuals who are immunocompromised — are being told not to consume the water, including not using it to cook foods such as pasta. Boiling the water — oftentimes the remedy for tainted water — in this case only makes it worse, as it concentrates the PFAs.

The rest of the town can continue to drink the water, because it’s not considered dangerous. The federal law allows for a much higher standard, which Hopkinton is not near.

Except maybe the water will cause problems in the long run. No one really knows.

The Boston Marathon returned — not on its usual date on Patriots Day but in October on the holiday formerly (but still officially, at least locally) known as Columbus Day but now acknowledged by many as Indigenous Peoples Day.

Race organizers used a rolling start for the non-elite participants instead of the standard set times, which gave the event a different feel. Oh, and we’ll be back at it again in a few months, when the race returns to its normal date — assuming we don’t have another COVID spike.

Annual Town Meeting was held in May outside, at the HHS football field. It had to be halted halfway through due to the numbers falling below a quorum, but then some people returned so the meeting could finish.

Last month we were informed by the town’s chief financial officer, Tim O’Leary, that Eversource has passed Dell EMC as the town’s top taxpayer. Except Eversource won’t pay its taxes, instead choosing to take the town to court over its assessment on a regular basis, even re-litigating cases it’s lost.

That one’s complicated, too.

The Main Street Corridor Project? Commercial solar zoning rules? The solar project on Wilson Street getting called out by tribal officials for failing to respect Indigenous landmarks? The proposed amendment to limit firearm use in town that was quickly shelved? Very complicated.

Thankfully, there were some positive stories in town that weren’t as complicated. The Hopkinton High School volleyball team won the Division 2 state title last month, sending retiring coach Margie Grabmeier out with her third championship.

In the spring, the HHS baseball team returned to the Division 2 state championship game under coach Steve Simoes — recently named to the Massachusetts Baseball Coaches Hall of Fame — but came up just short.

The popular Steve Slaman retired as fire chief and was sent off in style with a going-away party at the station before being replaced by Bill Miller.

Irfan Nasrullah became the first person of color to be elected Select Board chair.

Hopkinton held its first Pride Parade, and there was a march to protest anti-Asian hate following some scary national incidents.

HHS student Kevin Gu was named a National Student Poet after hauling in multiple awards in a state writing competition.

A dog park was built on the access road to the Fruit Street athletic fields.

Not much is easy these days. But as evidenced by the results (shared earlier this year) of a survey that polled residents about the town’s livability, it’s a lot less complicated living in Hopkinton.