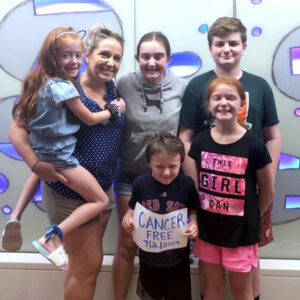 Brody McDermott (with sign) celebrates his cancer-free diagnosis with his family (from left): Piper, Lindsay, Taylor, Madison, and Conor.

The first day of kindergarten in Hopkinton was Aug. 29, and perhaps no child was more excited for that day than Brody McDermott.

After two years of treatment for leukemia, Brody was declared cancer-free in early July.

During some of his treatment, Brody’s interactions with other children had to be limited, as his immune system was compromised.

This summer, however, all restrictions were lifted. Just in time for kindergarten. 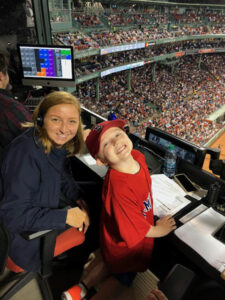 Brody McDermott was invited to announce an at-bat from the public address booth during a Red Sox game at Fenway Park last year.

For a boy who already has had a lifetime of experiences — including being able to meet famous Boston athletes like Patriots standouts Rob Gronkowski and Rex Burkhead and announce an at-bat from the public address booth during a Red Sox game at Fenway Park — nothing compared to the first day of kindergarten.

“I think that was bigger for him than anything else, in his mind,” said Brody’s mother, Lindsay, “He didn’t even say goodbye the first day. He just ran on the bus and he was gone. He loves it. I would say it’s bigger for him than meeting the athletes. My older kids were like, ‘Oh my gosh, we’re meeting [Red Sox star] Mookie Betts!’ For him it was, ‘I’m going to get the bus and ride to kindergarten!’ He just wanted to be around other kids.”

The journey to that bus ride was a long and arduous one, not just for Brody but for his entire family.

Brody was just 3 years old when Lindsay, a single mother of five, took her youngest to Milford Regional Medical Center when he showed symptoms of strep throat that would not go away.

Blood tests determined abnormalities, and Lindsay and Brody soon were at Children’s Hospital in Boston, where they received the diagnosis: a form of cancer called B-cell acute lymphoblastic leukemia (B-ALL).

“When you finally actually hear them say it, it’s like the floor drops out underneath you,” Lindsay said. “You don’t know where you are or what you’re doing or what life is going to be like.

“For me, having lost my mom to cancer when I was young, I think it was even worse. It was probably the worst moment of my whole life.”

The doctors told them there was a good chance they could successfully treat the cancer, but Lindsay did not initially process that part.

“No matter what they tell you about statistics, you never hear them,” she said. “It’s always ‘cancer.’ It’s a scary, scary word to hear, especially when it has to do with your child, and also a 3-year-old.”

Lindsay and Brody lived in Boston for a month while Brody had intense daily treatment — primarily high doses of steroids and chemotherapy.

Meanwhile, Brady’s brother, Conor (now a high school freshman), and three sisters, Taylor (an eighth-grader), Madison (a fourth-grader) and Piper (a second-grader), stayed with their grandmother and relied on the kindness of the community.

“It was tough to be away from them, but we had so many people in town step up and provide meals — tons of meals — and do small tasks for the kids or drive them all over the place, having playdates to watch the kids, or stop by and walk the dog every day,” said Lindsay. “Just incredible, incredible support from everyone. The schools were unbelievable with my other kids, watching over them, providing support for them. It was really beautiful, actually. It was people we knew, but also a lot of people we had no idea who they were.”

To make things more challenging, last year Lindsay broke her back, forcing her to rely on friends for even more assistance.

“I’m not somebody who asks for help,” said Lindsay, a former teacher at Elmwood School who as a Hopkinton Library Foundation board member helped raise funds to build the new library. “That was a big thing to reach out and take support from people. I’ve always been somebody who people can lean on. So this was really difficult.” 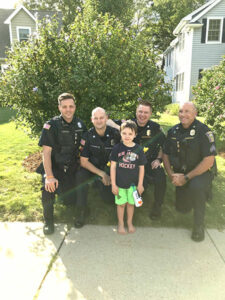 Members of the Hopkinton Police Department joined Brody McDermott at his cancer-free celebration on Sept. 7 at the family’s home on Hayden Rowe Street.

Earlier this month, the family had a community gathering to celebrate Brody being cancer-free, and to acknowledge September as National Pediatric Cancer Awareness Month. Some 180 people turned out, including members of Hopkinton’s Police and Fire Departments. The police had already a special place in the McDermotts’ hearts, as they stepped up with much-needed financial support via the Cops for Kids with Cancer charity early in the process.

Numerous other organizations, such as One Mission out of Westborough, also came through with support of various kinds — financial, physical, emotional, educational, etc. Late next month, the entire McDermott family is headed to Disney World courtesy of the Make-A-Wish Foundation.

Meanwhile, the McDermotts finally are able to settle in to their new normal. Brody still asks his mother if he has to get chemo or steroids or when they’re going to Boston — they do have monthly visits for blood tests — so there still is some adjusting.

“Now he gets it more,” Lindsay said. “He understands he has cancer — or had cancer — but back then it was, ‘We’re putting you through this thing.’ That was really hard for him. And then it became his norm. He doesn’t remember life without cancer.”

Lindsay also noticed the family becoming closer after surviving the ordeal together.

“We have a family bond that’s even tighter,” she said. “It was really difficult on them to fear that they would lose their brother. So maybe now they worry about each other more. We go to a lot more events as a family together. They support each other in sports and that type of thing. We’re a really close-knit family.”

The McDermotts — who have signs on their car saying “Brody is cancer-free!” — also now feel closer to the Hopkinton community.

“There’s so many people in this town who want to help,” Lindsay said. “It was really moving to see. We still get letters, people running by, driving by who leave notes on my windshield saying that it brightened their day, it motivated them. It really kind of gives you feeling that you’re attached to humanity. You’re not alone. And it wasn’t for nothing that he went through it.”