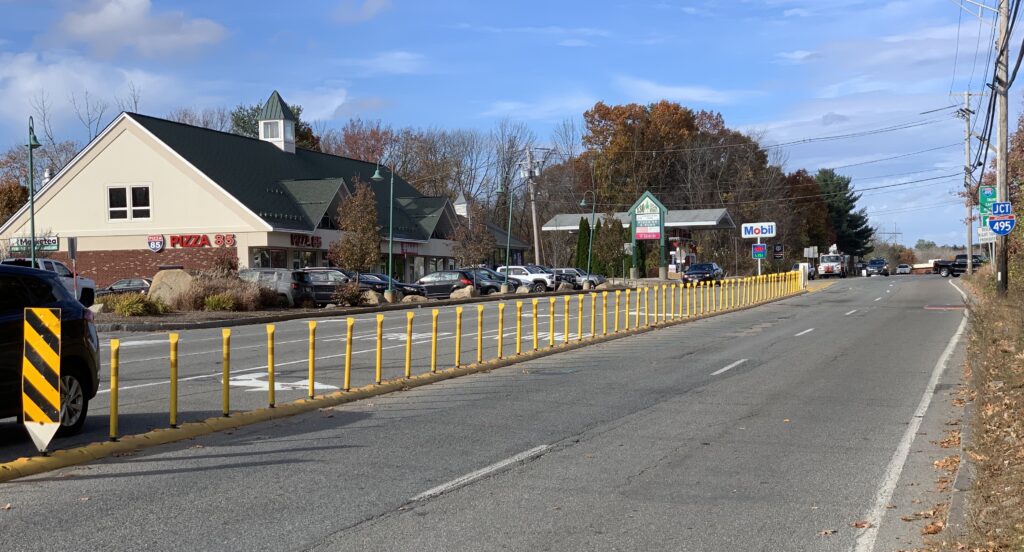 Town Manager Norman Khumalo said the town plans to install barriers on West Main Street similar to these that sit on Route 85 in Milford. PHOTO/JERRY SPAR

In case you missed it, the town last month announced plans to install barriers along West Main Street, between the two gas stations, in an effort to cut down on the number of accidents there — a section of roadway Police Chief Joseph Bennett previously noted is the most accident-prone in town.

The barriers are designed to prevent drivers exiting the gas stations from taking left turns across traffic. Most problems arise when an eastbound driver in the right lane stops to allow a Cumberland Farms customer to exit, but a driver in the left lane is not aware and keeps going, colliding with the exiting car.

Darlene Hayes knows all too well about the issues there. Her son was in an accident in December 2019 that totaled his car (he was not seriously injured), and since then she has pressed the town to act. She said she gathered close to 1,000 resident signatures and has appeared before the Select Board and visited with Town Manager Norman Khumalo multiple times to seek a resolution.

“It’s a frustrating process for me,” Hayes said. “I found out from a past police administrator that they’ve been researching that area since 2011, and it was the worst accident area in town. I was told to be patient, that it’s a process and it takes time.”

The town tried to work with Cumberland Farms to remedy the situation, but the owners were hesitant to do anything that would discourage people from using their services, Khumalo shared.

“Every time it comes back that Cumberland Farms does not like the idea,” Hayes said. “Well, do they not like public safety? It’s their customers taking a left and cutting across to get back to [Interstate] 495 or the west side of Hopkinton who are causing this.”

Ultimately, town officials took matters into their own hands and decided to install the barriers, which Khumalo said will be similar to the ones in front of the Wendy’s on Route 85 in Milford.

Department of Public Works Director John Westerling would not commit to a timeline for installing the barriers, saying on Nov. 2 that that his staff was “evaluating our options” and would proceed after reaching a conclusion.

“Even [last month] there was another bad accident there again, and that’s when I went to see Norman and he told me about the barriers,” Hayes said. “But he won’t say if the barriers will be in place by the end of the year. He said they’re out to bid and it takes time.

“In Holliston they ended up with lights in the center of town from one woman being extremely proactive, but it took two deaths. I don’t want that to happen here. I want to see something done, because nothing has been done.” 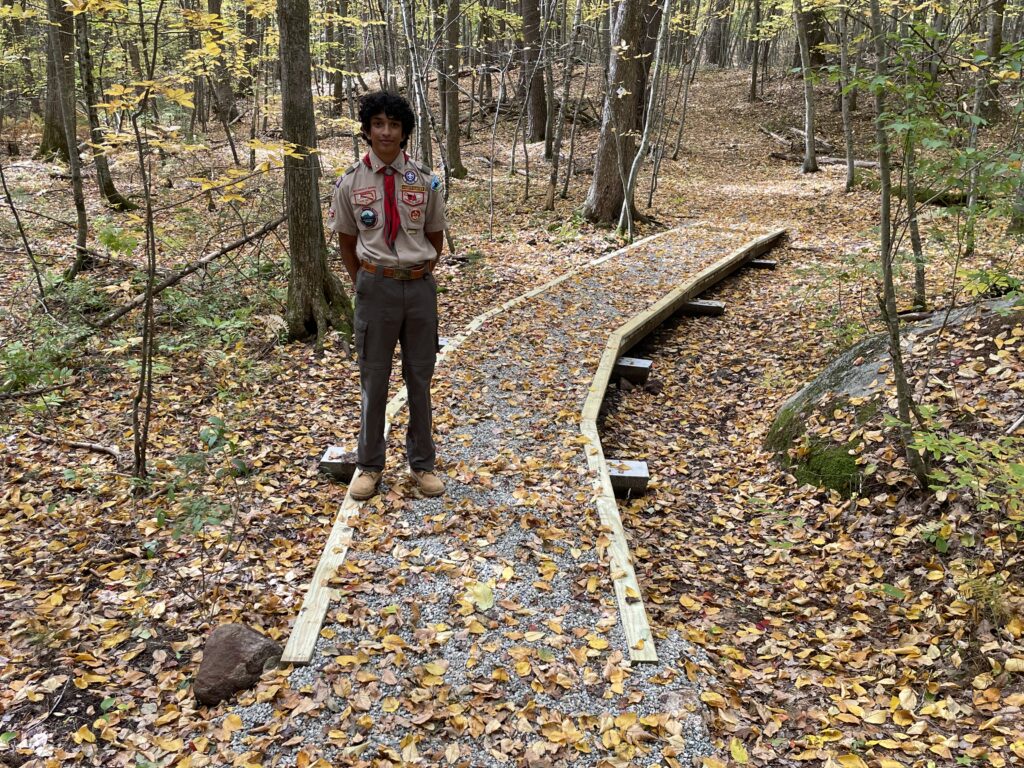 Hopkinton Boy Scout Ash Sridhar stands on the bridge he recently constructed on a trail in Whitehall Woods as part of his Eagle Scout project.

Hopkinton Troop 4 Boy Scout Ashwath Jose Sridhar — better known as Ash — recently completed a service project as part of his goal to attain the rank of Eagle Scout, the highest honor in Scouting.

Sridhar, a sophomore at Hopkinton High School, built a 40-foot-long, 4-foot-wide bridge that covers a marshy area on one of the trails in Whitehall Woods. The trail is used by hikers, mountain bikers, horseback riders, runners and dog walkers. The goal was to increase accessibility and usability, while also limiting damage to the ecosystem in the area.

The bridge was built on property owned by the Sudbury Valley Trustees (SVT), and SVT Assistant Director Dan Stimson suggested the idea to Sridhar.

“He has been trying to get this bridge built for several years now, but it didn’t happen due to various reasons,” Sridhar explained. “The first time I visited the project site with Mr. Stimson, I knew straight away that this would be the right service project for my Eagle Scout, since that’s exactly what I wanted to do. I took it up, even though I knew that it would be quite challenging.”

Sridhar raised funds for the project through contributions from family, friends and businesses, and he received on-site help from fellow Scouts and classmates, among others.

Sridhar received construction input from the Blackstone Valley New England Mountain Bikers Association — most notably Brian Forestal, who mentored Sridhar — and the Bay State Trail Riders Association. The bridge is rated to hold horses, as concrete footings were a suggestion from SVT.

The Hopkinton Conservation Commission and Hopkinton Area Land Trust (which holds the conservation restriction on the property) also supported the project.

Congratulations to the Hopkinton Country Club Charitable Foundation (HCCCF), which announced that entering this year it had surpassed the $1 million mark in grants to youth development in economic assistance programs in MetroWest since its inception in 2010.

The organization is hosting its annual fundraising gala on Saturday, Nov. 19, at the Hopkinton Country Club ballroom with a disco theme (check our calendar section for details or visit hopkintoncccf.org). The HCCCF spotlight grantee, to be recognized at the gala, is Daniel’s Table, which supports local families and individuals in need with a focus on locally sourced, nutritious foods. The Framingham-based nonprofit’s mission is to create food security through nutrition and education as the catalyst to empower individuals and families to reach their full potential.

Said Wahlers: “Daniel’s Table, under the leadership of David and Alicia Blais, does amazing work, and the HCCCF is privileged to support their cause.”