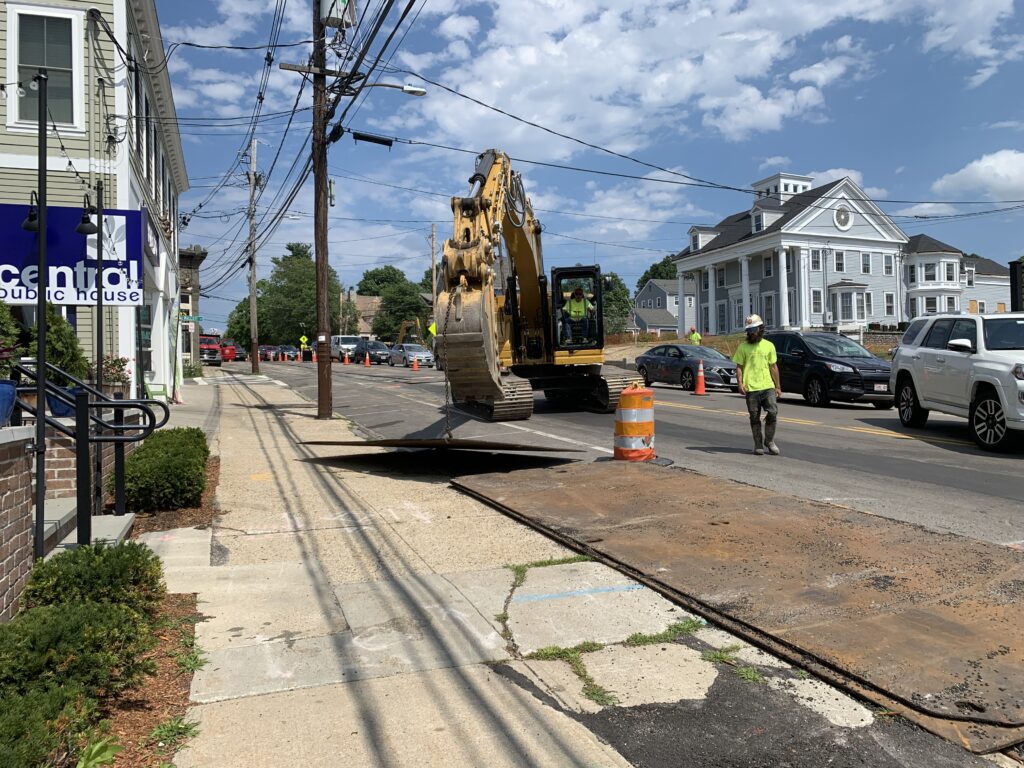 It’s time for some light summer reading, as we unpack the notebook of the mind. Here are some miscellaneous thoughts compiled while sitting in downtown traffic.

— In case the town is thinking about changing the name of the Main Street Corridor Project, I have a few suggestions. Here’s my top five:
5. Pain Street
4. Dust in the Windshield
3. Nightmare on Elm Street Detour
2. Stop the Steel
1. Route 135-Minute Delay

— Of course, compounding the problem with the Main Street work is that the town recently started repaving Hayden Rowe Street from Chestnut Street to the Milford line, closing a lane of traffic in the process. And the Fruit Street bridge on the border with Southborough remains completely closed while the state rebuilds it as part of the I-90/I-495 interchange project. They have eliminated our prime escape routes.

But wait, there’s more: The DPW recently announced repaving work at the West Main Street/South Street intersection as well as South Street at the Milford line is scheduled for July 25-29 and Aug. 8-12. Much of that work will be done overnight, but it still limits drivers’ ability to find ways around the Main Street madness.

— No disrespect to the current Select Board, but all of the meetings of this new board have run about two hours over the scheduled time. Somewhere, Brendan Tedstone’s stopwatch is crying.

Seriously, though, while the members have the right to take their time discussing matters of importance, the agenda should reflect more time for each issue so that people with business before the board have a better idea when they will be called.

— I have heard rumors that people driving red vehicles are more likely to be pulled over on the highway by police seeking speeders, and I don’t know if it’s true, but one week after I bought a red car (not my first choice), I got a ticket — my first offense in about 20 years. I figure I’m safe in town, as there’s so much dust covering my car now the red doesn’t shine through.

— My goldendoodle made his first appearance in the Police Log last month for an unauthorized solo jaunt up Pleasant Street when he escaped a playdate and decided he wanted to head home. Apologies to drivers taking the Main Street detour who might have had to dodge him. It seems like there are three to four reports of dogs running loose in each week’s Police Log, so we’re in good company.

— The Hopkinton Center for the Arts gets high marks for creativity when it comes to fundraising, which makes sense considering the many creative people there. The HCA’s latest fundraising drive is called Patchwork and Pavers. Individuals can leave a “lasting mark on the life and work of the HCA” by having a name included on a farmhouse patchwork quilt, having a name etched on a brass plaque on a rocking chair, picnic table or stone bench, or placing a message on a paver in the amphitheater. Visit hopartscenter.org for more information.

— The town’s resident survey about Town Meeting offered few surprises, but it was interesting to see the detailed results. One of the questions asked where people get their information about Town Meeting, and the top response was local newspapers, followed closely by social media.

This brings to mind an email we recently received from an administrator in a similarly sized town in Eastern Massachusetts who lamented the fact that his community had no independent newspaper/website covering local news and politics and asked how we were able to succeed. I’m not looking to toot our own horn here, but having independent, local news coverage should never be taken for granted. Thank you to our readers and advertisers who help keep us going.

Congratulations to Hopkinton’s Barbara Girardi, who last month was recognized as a winner of a Myra Kraft Community MVP Award, presented by the New England Patriots Foundation.

Girardi was presented with a $10,000 check for Live4Evan, a charity she created in memory of her son. Evan Girardi died from a congenital heart defect at the age of 20. His family and friends established an independent housing program for families receiving long-term cardiac care in the Greater Boston area.

“Their contribution allows us to work with families in crisis who need a place to stay,” Girardi said. “This award means the world to me and the entire Live4Evan organization.”

Locals to ride in Pan-Mass Challenge

The event offers 16 one- and two-day routes that range from 25 to 210 miles. It claims to be the nation’s single most successful athletic fundraiser, raising $831 million over its 42 years, including more than $114 million since the start of the COVID-19 pandemic in early 2020.

“We’re coming off of a record-breaking fundraising year for Dana-Farber, and we’re thrilled to be ‘back in the saddle’ this summer, bringing our PMC community together for our first traditional PMC weekend since 2019 with our sights set on making an even bigger impact in the fight against cancer,” stated Billy Starr, founder and executive director of the PMC. “We are so inspired by the dedication of our riders, volunteers, donors, sponsors and community members throughout the last two challenging years and can’t wait to see everyone on the road this August for the 43rd PMC.”