It’s difficult to imagine Hopkins School without Ed Flannery roaming the halls, but the elementary school will be without its affable longtime custodian starting next month, as Flannery heads into retirement.

“Eddie has been the backbone of Hopkins School since the first day it opened its doors,” said longtime Hopkins teacher and administrator Deanna Law. “He is our go-to guy who can fix just about anything and always does so with a smile and a sense of humor. He will be greatly missed, and his kindness will never be forgotten.”

Flannery was coming off a 26-year stint with New England Frozen Foods in 1998 — first working in the warehouse (“where the temperature was 17 below zero,” he recalled) and later diving a tractor-trailer and delivering to local grocery stores — and was looking for a new job after the company went out of business.

So the Hopkinton High School alumnus returned to his roots, first as a floater between all the Hopkinton schools before landing at Hopkins for good in 2001. 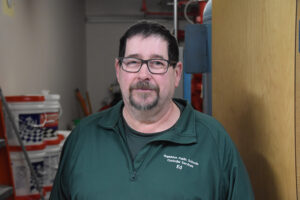 Ed Flannery is retiring after 21 years as a custodian at Hopkins School.
PHOTO/JERRY SPAR

Through the years, Flannery has seen thousands of fourth- and fifth-graders come through the doors, and he has many fond memories.

“I like dress-up day for the students because there are always some very strange costumes,” he said. “I also like the first day of school because of all the students’ faces — some happy, some scared and some lost. But all happy to be here.”

One other memory stands out in his mind, but it has nothing to do with the kids.

“I came in one day and turned on all the lights, and about a half-hour later I get a call from a teacher that there is a river of water coming down the back stairway,” he recalled. “A water pipe had burst and flooded half of the upstairs rooms. That was a fun day.”

Flannery’s contributions to the town extend beyond the doors of Hopkins. He also coached football for many years, first at the youth level and later at the high school.

“In 1984 I got involved in coaching my sons Paul and Jason in youth football and from there I just stayed with it until 2001. Everyone of those years I coached with Stu Glassman and a bunch of different relatives and friends,” said Flannery, who played football for coach Aubrey Doyle at HHS in 1969 and ’70. “After a few years of not coaching I got a call [in 2009] from Steve Simoes, the high school football coach, and was asked if I would like to coach the freshmen and the JV team with Rich Paquette, and I jumped at the chance. After one year everything changed, Coach Simoes stepped down and Coach Paquette was starting a family.

“The next year Coach [Jim] Girard became the new football coach and I started a nine-year run coaching with Mike Webb. After this past football season I told Coach Webb that I am retiring from coaching.”

Flannery also served as an announcer for local cable broadcasts of HHS football games from 1988-94, sharing the mic with the likes of Scott Flannery (his cousin), Jerry Hanna and Ron Eldridge.

Flannery isn’t sure what the future holds, other than it won’t be filled with nearly as much time at work.

“My plan after I retire is to relax a few weeks and then look for a part-time job just to stay active,” he said.

Hopkinton residents watching the New England Patriots’ Super Bowl victory parade on Feb. 5 in downtown Boston might have seen a familiar face on one of the vehicles — if they were able to divert their eyes from Tom Brady. Just in front of the duck boat carrying the legendary quarterback was a press truck, and at the wheel was Hopkinton’s Ron Foisy.

The press trucks were organized by Dave McGillivray, who is best known for overseeing the logistics of the Boston Marathon. Foisy has helped out with with the marathon since shortly after he moved to Hopkinton in 1989, and he eventually became part of McGillivray’s team, helping manage road races across the country.

When Foisy asked if McGillivray needed any help, he was assigned to drive one of the three press trucks. It was an experience he won’t soon forget.

“It was just a real thrill and privilege just to be part of that event,” Foisy said. “It was just a lot of fun to be on the inside, looking at it from that perspective.”

Foisy said the crowd reaction is what he remembers most.

“My ears are still ringing, because I was driving in the space immediately in front of Brady’s duck boat,” he said. “As I would continue down the course, about the same time people started seeing Brady standing up in the duck boat behind me, they would see him and they would start screaming their heads off, so my head was just spinning the whole time.”

The Knights of Columbus Bishop Rice Council #4822 Ashland-Hopkinton recently made a donation of stuffed animals to the Ashland Police Department. The stuffed animals were to be placed in police cruisers for us in providing comfort to children following accidents, fires or other times of trauma or stress.

“I’ll admit that the teddy bear donation is a small thing, but you never know the difference small things might make in someone’s life,” said Knights of Columbus representative Andy Vail, who also indicated the group made a similar offer to the Hopkinton Police Department.

← Photo: Yoga for a cause Sports Roundup: HHS trio honored at Girls and Women in Sport Day →