Independent Thoughts: Garabedian got it started for HCA 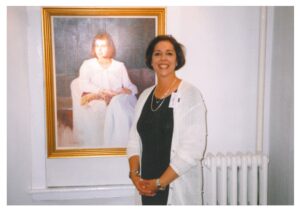 Dora Garabedian, posing in front a painting at the Hopkinton Center for the Arts, was instrumental in the organization’s success.

When Dora Garabedian moved to Hopkinton in 1988 with her husband, Tom, and three young sons, she quickly became involved in the schools. A proponent of the arts, she coordinated visits from artists and musicians in order to share her passion with the town’s youth.

She eventually set bigger goals. With some other like-minded friends, Garabedian started the Cultural Arts Alliance in the mid-1990s. She later spearheaded the successful effort to acquire the Terry farmhouse to host classes, lessons and shows. Eventually it became the Hopkinton Center for the Arts (HCA), now a popular arts center on Hayden Rowe Street, next to Hopkinton High School.

Garabedian died last month at the age of 70, but her impact won’t soon be forgotten.

“She really was the driving force of getting it done,” said HCA Executive Director Kelly Grill. “She saw the opportunity when the town purchased the lands at the Terry property to build the school. She worked with four or five other volunteers, but she was the one who really was the driving force behind writing the RFP [request for proposal] and putting it together and going before the town and talking to people about how this would be really good for the town to have an arts center there and renovate [the building]. Because of her leadership, it happened.

“Her vision for it, when I look back at all of the paperwork that she put together, was somewhere where people of all ages could come and not only have classes, the education piece, but an art gallery and a performance space. And that’s exactly what happened.”

Garabedian was exposed to the arts at an early age, as her mother taught an after-school art program and her father was a classical music fan. She played the flute throughout her life.

And she was a born leader, according to Grill.

“I would describe her as grace personified,” Grill said. “She was just the loveliest woman. She was elegant and open. She had tremendous leadership qualities. She was a visionary. She was truly a visionary. And people were drawn to her, because she had a beautiful smile and magnetic personality. I know that that’s why all of it happened, because people were drawn to her and wanted to be involved because of her.”

Tom Garabedian said his wife took great pride in what the HCA had become.

“She was thrilled to see what this all developed into,” he said. “Obviously there are many, many people who were involved in taking this vision forward, but she was quietly very pleased with what it matured into, and how people like Kelly and Kris [Waldman, former co-executive director] caused it to evolve into something that’s not only for Hopkinton, not only for MetroWest, but has reached much more broadly throughout Eastern Massachusetts.”

A scholarship has been established in Garabedian’s name (hopartscenter.networkforgood.com/projects/120766-2021-annual-fund) to provide financial support for classes and lessons in music and art. Additionally, the HCA recently established the Dora Garabedian Visionary Award, which will be presented every year to someone who has moved the mission of the organization forward, Grill explained.

Deborah Fein-Brug resigned from the Planning Board this month as she heads to her new home in Maine.

“My family is starting a business that’s very exciting to us: Brug Seafarm, an oyster farm on the New Meadows River,” she explained, noting that one of her two sons, Jeremy, an environmental scientist, will head the business. “We’re raising oysters for people to eat and to help purify the water environmentally.”

Fein-Brug spent 23 years in Hopkinton, moving here in 1998. She joined the Planning Board in 2017, after previously serving on the Downtown Revitalization Committee and Downtown Historic District Commission.

“Because of the political situation and things that were going on that way, I felt like I needed to step forward,” she recalled, noting that she is an architect so she has experience planning and building projects.

“I think I was one of the initial people who opened the conversation about the unprecedented growth in Hopkinton, and I was a proponent of continued awareness of growth and how it affects Hopkinton vis-a-vis solar farms and housing clusters, et cetera,” she added. “For me, that was the big [issue]. How can we, side by side, continue to go in a good direction with all the growth that’s been happening.”

Fein-Brug was active in the community in other ways, helping with Scouts, coaching youth soccer and serving as one of the organizers of the HCA haunted house and Harry Potter-themed fundraisers and the HPTA Fifties dance.

“I highly recommend new people in town to get involved and stay involved whether it’s for the kids or for town government,” she said. 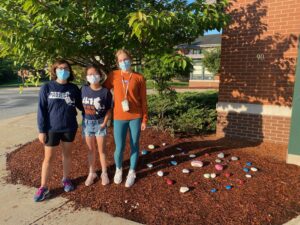 Project 351 alumni (from left) Anna Noroian, Karen Tang and Shelby Jones pose next to the 9/11 rock garden they created at Hopkinton High School.

Three alumni of Project 351 — a community service organization that brings together one eighth-grader from every town in the state — recently got together to create a 9/11 memorial rock garden outside Hopkinton High School.

“We wanted to make a beautiful tribute to the 9/11 victims and fallen heroes from 20 years ago,” explained HHS freshman Anna Noroian. “We really just wanted to do something big and powerful, to remember their legacy and their lives.”

Noroian, junior Shelby Jones and sophomore Karen Tang met at the Town Common and painted rocks there, inscribing some with the names of people from the region who perished during the terrorist attacks 20 years ago. With support from school administration, they created the garden and also read a statement, written by Jones, during the HHS morning announcements on Sept. 10.

“September 11 has been named a National Day of Service and Remembrance, where we are all challenged to engage in charitable acts,” the statement read. “In this way, we pay tribute to the 9/11 victims, survivors and responders.”