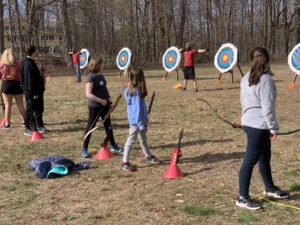 Archery is one of the newer — and increasingly popular — programs being offered by the town’s Parks & Rec program. PHOTO/JERRY SPAR

Thanks to a fast-growing population and an increasingly diverse populace, the Hopkinton Parks & Recreation Department has been pushed to expand its offerings to residents well beyond those traditionally associated with the office.

In addition to youth sports like baseball, soccer, basketball and lacrosse, recent programs include an etiquette workshop for kids, babysitting classes with first aid and CPR, public speaking classes for kids, e-sports, Minecraft and outdoor yoga/hiking, among other activities.

“As our town grew and as the town demographics changed, we have had a demand for things that are different from the typical sports,” said Parks & Rec Director Jay Guelfi. “We have made an effort over the past few years to accommodate and address the demands of our residents.”

The department has offered different sports as well, including programs for tennis, golf and archery.

“Families are looking to us now to provide a lot of different kinds of programming, and the only thing holding us back is space,” Guelfi said. “We are trying to get creative with our space.”

The department partnered with Shining Rock Golf Course in Northbridge to offer golf clinics and has been using the field behind Center School for archery lessons.

The department also is trying to expand the number of tennis courts.

“Five years ago, we barely had any interest in tennis,” he said. “Now we have hundreds of kids.”

Program coordinator Jenny Hart said the population surge in town has driven the need for more — and more diverse — programs. The department is hoping to offer a fishing class for kids as well as a photography workshop for kids and adults in the near future, she said.

The size of the department has increased with the increased demand for services. Parks & Rec now has two full-time employees, Guelfi and Hart, along with other staff working part-time.

“The town has committed more resources and the [Parks & Rec Commission] has taken their roles more seriously,” Hart said.

Guelfi is in his seventh year working for the department, while Hart has been with Parks & Rec for six years. They noted that they have expanded their summer concerts on the Town Common as well as the nighttime movie offerings and both have been well received.

They also are working to build pickleball courts. The department planned to offer pickleball, which is similar to tennis but played on a smaller court with paddles and a lighter ball, at Center School, but the pandemic put a hold on that.

Whether programs continue and expand depends entirely on the turnout, Hart said, but the response to most of the Parks & Rec offerings has been strong.

In one example, STEM basketball has a maximum registration capacity of 15 people. The program filled up and there are 17 people on the waitlist, Hart said.

“We are just limited by gym space,” she said. “I would be offering another session if I had the space for it.”

So that the four-legged Hopkinton residents are not left out, Guelfi said a dog park is expected to open sometime in October.

“We received a private grant and some public funding and it should be wrapping up in the next few weeks,” he said. “Folks in town showed interest in that and we finally got it done.”

It’s all part of the department’s mission to serve Hopkinton’s residents, he said.

“The goal here is to provide programming for every resident in town,” Guelfi said. “We want to make sure every resident has access to the parks and the ability to participate in some sort of recreational programming.”

But, when he started the job, did he think he would be offering something called “Business Sharks?”

“No way,” Guelfi said with a chuckle.