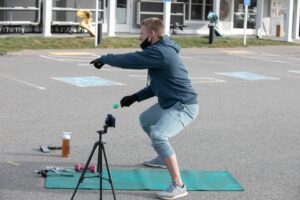 Torsten Grabbert started his professional life as an electrical engineer in his home country of Germany. It didn’t take long before he decided he didn’t have the passion for that career. At age 23 he became a fitness instructor and never looked back.

In 2017, Grabbert — now 40 — moved with his husband (a neuroscientist) to the area and found work at a fitness center before deciding to start his own business, which he calls BodyFit (bodyfithopkinton.com). He was put in touch with HCA director Kelly Grill and soon found a home there, renting space in the building.

Grabbert said there are noticeable differences between the fitness industry in his old country and his new one, primarily how people here show their appreciation for a teacher they like.

“A pushup is the same in Germany as it is here — and the people have the same trouble with it,” he said with a laugh. “But here in the U.S. the people are more willing to pay for quality. If people really like something, they’re really supportive here. And it’s easier to start a business in the U.S.” 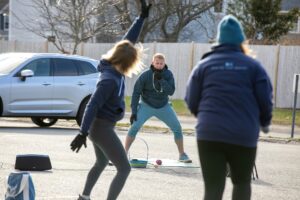 Grabbert’s classes have a quick pace and positive energy — “We’re not done!” is one of his oft-repeated motivational statements — and that’s part of what makes them feel different, even though many of the exercises might not be new.

“A pushup is a pushup, a squat is a squat — you cannot start a completely new kind of movement,” he said. “What I do is [make it so] you don’t really feel how long the class is. It’s 55 minutes, and you don’t feel it’s really 55 minutes.”

This is done by keeping the mood light and fun, but also by taking minimal stoppages.

In terms of the actual workout, he calls it a mix of movements.

Added Grabbert: “There’s a lot of daily improvisation, because not every day is the same. It depends on the weather, it depends on your own mood.”

Hopkinton resident Lisa Hicks describes the classes as “unique, varied and always just right,” and Grabbert — who has been known to drive to participants’ houses to drop off home-baked goodies for birthdays and holidays — as “positive, kind and thoughtful, as well as fun, energetic and motivating.”

Another part of the appeal is the location. The classes are held either inside or outside the HCA — lately almost exclusively outside, due to the pandemic — which gives the sessions a more relaxed feel.

“I don’t want to work in a gym anymore, I’ve had enough with gyms,” Grabbert said. “This is also the reason why I wanted a place like the HCA. It’s not a gym, it’s a kind of culture center. You don’t feel — it’s fitness. You hear the word fitness and then you have to work — fitness, fitness, fitness the whole time. It’s not my way. I try to reduce the pressure of fitness. With my method, the way I teach, you can do whatever works for you.”

Clinton Street resident Rory Warren was on a bike ride in Holliston a few years back when he spotted a small bookshelf on a post. It was a Little Free Library, where residents share books.

“I always thought it was a great idea,” Warren said. “My wife and I talked about it and we decided to give it a shot. We did a little research on in the internet and found this organization [Wisconsin-based nonprofit Little Free Library] and went with it.” 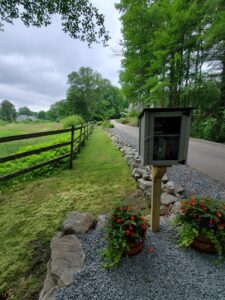 A Little Free Library on Clinton Street has been popular with neighbors. PHOTO/RORY WARREN

Warren ordered a pre-cut bookshelf, assembled it and installed it at the end of his driveway. “It was very simple and easy,” he said.

Now instead of the couple’s many books sitting around their house, they can allow others to enjoy them.

“My wife and I both read extensively, so we had a ton of books,” Warren said. “I never liked e-readers, I always like to have a book in my hand. So we bought them and they’re here. We always give them away or trade them, but it just got to the point where we had too many books. So we decided we’d kill two birds with one stone. So we have a well-stocked library.

“We rotate the content. There’s always some mystery writer, because I read a lot of mystery and detective novels. We feature one author every two weeks.”

At one point early in the pandemic, Warren put gloves and masks on one of the shelves. He also occasionally will contribute some eggs from chickens he and his wife raise. But primarily there are books — and plenty of them. In fact, Warren said he plans to build a bigger storage unit, as people have been contributing to the collection.