Independent Thoughts: Let there be lights

MacDowell announced to the Planning Board on Jan. 28 that he would provide for a traffic light at the intersection of East Main Street and Legacy Farm Road.

A Legacy Farms engineer had indicated that the level of traffic did not yet met the requirements for the installation of lights as per the Host Community Agreement, but an engineer working on behalf of the town disputed that finding. Said MacDowell to a receptive Planning Board: “Rather than debating it, we’re just going to do it.”

MacDowell might have been in a good mood because his firm, Baystone Development, recently closed on a deal to sell more than 17 acres for $9.1 million to Pulte Group, which announced plans to construct 48 single-family homes and 33 attached duplex homes on the parcel of former Weston Nurseries land.

Meanwhile, traffic lights also were in the news on Jan. 24 when the signals at the busy intersection of West Main Street and South Street were brought down by heavy winds and rain. Traffic was rerouted for most of the day while workers repaired and reinstalled them.

Also in late January workers started installing new lights at the corner of Chestnut Street and Hayden Rowe, preparing to replace the blinking caution/red light with a full signal.
Now if we can get a traffic light at the intersection of Pleasant Street and Main Street we’ll really be making progress. 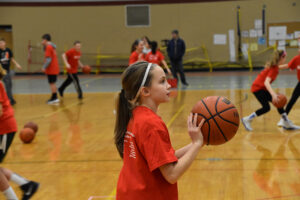 Division winners qualify for district competition, and the top finishers from districts can advance to the state finals.

The event moved to the high school from its previous location at Keefe Tech in Framingham, and Joe Altman, one of the organizers, termed it “a huge success,” indicating there are plans to return to HHS next year.

The Knights of Columbus is a Roman Catholic men’s community service organization that has sponsored a free throw competition since 1972. The Bishop Rice Council #4822 conducts numerous charity events in support of the parishes of St. John the Evangelist in Hopkinton and St. Cecilia’s in Ashland.

For the second straight year, Hopkinton’s Luke Dragsbaek got a chance to take to the ice at a Bruins game at TD Garden. Prior to the B’s game against the St. Louis Blues on Jan. 17, Dragsbaek was a Hockey is for Everyone Blue Line Captain.

Hockey is for Everyone is a program that uses hockey to drive positive social change and foster more inclusive communities regardless of race, color, religion, national origin, gender disability, sexual orientation and socio-economic status.

Dragsbaek, a 13-year-old who plays for the Hopkinton Middle School hockey team, is an LGBTQ activist.

Hopkinton’s Melissa Hayes, a freshman at Framingham State University, was named as a winner of the Girl Scouts Gold Award, the organization’s highest honor, for her work creating and teaching Girls Lego Robotics, an after-school class for Hopkins Elementary School students.

Hayes worked with the schools, PTA and Parks and Recreation to start the class, which now is run by Hopkinton High School Robotics teachers.

The Girl Scouts Gold Award is for Girl Scouts who spend more than 80 hours (over 1-2 years) on community service to create a sustainable solution to an issue in their community. Hayes will be honored along with other recipients at a ceremony at the Massachusetts State House in June.

Local organizations once again are raising money by having people run the Boston Marathon and accept donations on their behalf.

Ella Cornu is running to raise money for the Hopkinton Public Library Foundation. A 2016 graduate of Hopkinton High School, Cornu is a junior at Simmons College in Boston studying to be a nurse.

“It has always been my dream to run the Boston Marathon, and I’m so excited to run after so many years at the starting line,” Cornu states on her donation page. “The library does so much for my town of Hopkinton and I’m really excited to give back to them.”

Chris Hart is running for the benefit of eHop, an organization that encourages civic engagement by sharing news and information about Hopkinton matters.

“Patriots Day is without question one of my favorite days of the year and every year I think about how much I’d like to run the race,” Hart wrote in his introductory message. “Usually there is also an inner voice that says something like, you shouldn’t really even consider it, it’s highly unlikely you’ll be able to pull that off. The cycle I’ve been on for the past 7 or 8 years is: Patriots Day inspired jogging, run the Timlin 5K in June (another favorite day), get busy over the summer, be back at zero around labor day.

“This past summer I cut BBQ events and cookbook writing and other extracurricular stuff out of my schedule and kept running. Around September I found myself running 8-10 miles on my long run days and feeling pretty good. This time the in- ner voice said something different, it said: You could run Boston.”

← Positively Pucci: Sophomore from Hopkinton leads way for Wheaton Photo: Yoga for a cause →