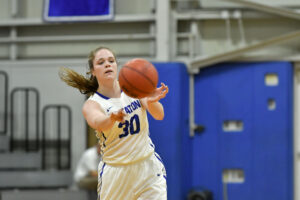 Anyone concerned that Mikayla Pucci might not be able to improve on her impressive freshman season at Wheaton College must not know the 5-foot-9 forward very well. With her work ethic, there was no way she would ever let up in her efforts to make herself a better player.

After averaging a team-high 12.7 points as a rookie, Pucci headed into February averaging 15.6 points and 5.4 rebounds while shooting just over 50 percent from the field. Last month she scored her 500th career point.

“She’s every coach’s dream,” said Hopkinton High coach Mike Greco. “She turned herself into a basketball player by sheer will and hard work. She understands the game and her role, and the role of all the other positions. She’d sacrifice her body, her minutes, her shots for the good of the team.” The eldest of Mike and Kim’s three children, Pucci carried that attitude to Wheaton. Her intensity and energy on the court show in her face and by her constantly moving ponytail.

“We have a philosophy in our program: EFA — effort, focus, attitude,” longtime Wheaton coach Melissa Hodgdon said. “If you give that every day to whatever you are doing, you will be your best. Pucci does that. Her effort is always 100 percent. She is sooooo coachable and focused at all times. And her attitude is what every coach dreams of — an authentically positive person with amazing faith.”

“Pooch,” as she was known by Hopkinton coaches and teammates, also earned the nickname “Glue Girl” from Greco.

“It wasn’t like she stood out at any one thing, but she was always getting everyone organized and making sure everyone was included on and off the court,” Greco said.
She served as two-year high school basketball captain, as well as captain of the state championship volleyball team.

She already is a captain at Wheaton, where everyone calls her “Pucci.”

“The student-athletes on the team and the coaches vote for captains,” Hodgdon said. “We, as a team, talk about how grade/age does not matter for skill, leadership or anything else — it is all about what is best for the team and program on and off the court.” 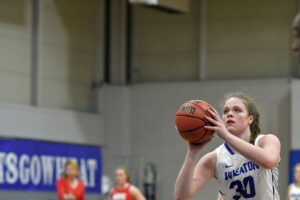 One of the off-court aspects that drew Pucci to the Wheaton program was its commitment to community service.

“I knew from the start that I wanted to continue my basketball career in college,” Pucci said. “Throughout the recruiting process, I focused a lot on finding a school with a strong education program where I would still be able to do what I enjoy outside of basketball and classes. At Wheaton, I am able to be a part of Best [Buddies] and the Education Club, as well as tutor at Norton High School. I also love that Coach Hodgdon and the Wheaton basketball program put a strong emphasis on community service. We do work with Heller’s Angels [a Special Olympics program], run clinics and camps for local kids, and participate in other community projects throughout the year.”

“We modeled the idea of Math Madness from a program developed by the Worcester State women’s basketball team,” said the secondary education and mathematics double major.

“Coach Hodgdon presented the idea to me last spring and I was super excited to create the booklet for Wheaton basketball. It was a great way to combine my love of teaching and basketball. The event was extremely successful and it seemed like the students really enjoyed it. We look forward to continuing and expanding Math Madness for the upcoming years.”

While Pucci is enjoying her time at Wheaton, she has a career goal for when college is over.

“My dream job would include teaching math by day and coaching basketball by night!” she said.