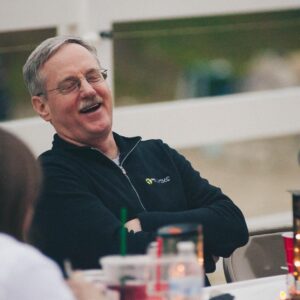 Pastor Bob Cloutier served Faith Community Church of Hopkinton for 37 years until his death in August.

Bob Cloutier — known for decades at Faith Community Church of Hopkinton as Pastor Bob — gave his final sermon in October 2019 and talked about heaven.

Cloutier had received treatment for prostate cancer in 2019 before he returned to the podium.

He said that when he makes his way to heaven, he was most looking forward to meeting his unborn child — a miscarriage three months into his wife’s first pregnancy prevented a meeting on earth.

Cloutier said he envisioned the child greeting him by saying, “Welcome home, Dad. I’m so glad to meet you.”

Added Cloutier: “We lost that child for a time, but not forever.”

In August of this year, Cloutier passed away following an eight-month battle with a rare form of lymphoma.

His final sermon serves as some solace to his family — wife Linda and their three children — to whom he was very close, as well as the many people he ministered during his 37 years with the church.

Cloutier and his wife became members of the FCCH — then known as First Congregational Church of Hopkinton and located in the center of town — in 1974.

Angie Gerrard, the church’s director of family ministry, said the pastor, Rev. Dick Germaine, encouraged Cloutier to join the ministry, just before the church’s remarkable growth that led to the move to the bigger facility on East Main Street.

“He came on staff and subsequently went to seminary,” Gerrard said. “He was certainly one of the founding people in regards of the move from Hopkinton Center to the location that we’re in now. So he was critical in those early years of growth, serving in various roles. He was part of that team that made that big transition.”

Cloutier eventually settled into the church’s pastor of care, leading all of the care ministries.

“When we had a family in crisis, for example, or family that lost loved ones, I worked closely with him in those situations,” Gerrard said. “And I can honestly say, I don’t know anybody who cares for people better than Bob. He was incredible in that space. You never felt rushed. Whatever time you needed, he took it to care well for people.

“He was a funny guy, too. He had a great sense of humor. He loved to laugh. He just struck this great balance of a person where he cared well and deeply, but he also could laugh and joke around — he certainly had his share of bad jokes.”

Hopkinton’s Vinnie Cappetta, who works at Crossroads Community Church in Framingham and runs Check Your Compass Counseling, said Cloutier was one of the first pastors he met when he moved to town in 1999.

“He welcomed me into the area and showed me the ropes of ministry here in New England,” Cappetta shared. “He was an inspiration to many other pastors in MetroWest due to his longevity in ministry at one church for so many years. He worked hard to ensure the people at his church felt cared for and had the opportunities to grow in their faith. He was constantly evaluating the programs he oversaw to ensure that they were working well for the people in the church and for those outside the church who needed help.

“He loved people, he loved Hopkinton, he loved New England — and all that love was motivated by his love for God.” 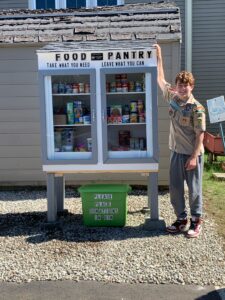 After doing community service at Project Just Because, the food/clothing pantry on South Street, Hopkinton High School junior Adam Distasio knew what he wanted to do for his Eagle Scout project. Understanding the need for food assistance, he focused his efforts on providing another option for individuals to access free food.

“I made a blessing box — like a mini-food pantry — at St. John’s church,” Distasio explained. “People can go and take food if they need it. And there’s a donation box underneath for people to leave food.”

Distasio constructed the box in his garage with help from his father, Steve, troopmates Jack and Ryan Hoyt, and the Hoyts’ father, Ted, who has carpentry experience. He received donations from Home Depot, McIntyre Loam, Hopkinton Lumber and T&M Landscaping, then Market Basket contributed money for the first batch of food.

The box made its debut the last weekend in September, and Distasio reported that it was busy, with some items being taken and the donation box filled. Donated food that does not fit on the shelves will be donated to Project Just Because, which is helping maintain the box.

Select Board member Amy Ritterbusch was absent from two recent Select Board meetings as she recovers from surgery to remove an acoustic neuroma — a benign tumor that sits on a nerve leading from the inner ear to the brain and can affect balance and hearing.

“I’m feeling a little better each day, walking around the neighborhood to relearn my balance,” Ritterbusch shared.

While her doctor told her she likely would need to take off two months from work, Ritterbusch is hoping to attend the Oct. 19 Select Board meeting, if not in person then remotely. She also expressed disappointment that she was not able to attend the Oct. 5 Bobbi Gibb statue unveiling at the Hopkinton Center for the Arts.