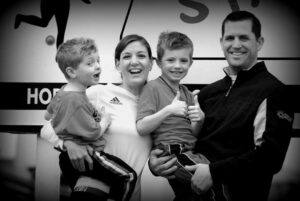 After her husband passed away in a car accident in May 2016, Hopkinton resident Kristen Pedroli had to navigate some unfamiliar territory. Realizing she could use some help learning how to deal with the emotional turmoil — along with suddenly learning to be a single parent of two young boys — she took a six-week course called Parenting While Grieving.

She found it so helpful that she decided to start a similar program herself.

That Christmas, Pedroli received a package in the mail. She thought it was something she had ordered for her sons.

“It turned out that it was a package of all items put together by some women in Waltham, where my college roommate lives,” Pedroli recalled. “It was all comforting, uplifting stuff. I wasn’t expecting it, and it made my day.”

Again, Pedroli was so inspired that she decided to pay it forward herself. She started a nonprofit called the MRP Project — MRP being her late husband’s initials: Michael Richard Pedroli.

“I started doing that for people in 2019,” she said. “It was just something I tried to see if it would catch on. And it caught on. I just put it out there, I created a private Facebook page and I said this is what I want to do, and if you know anyone who’s going through a hard time please let me know. And the nominations just started coming in and they haven’t stopped. People started nominating individuals that they knew that were going through a tough time, whether it be a death or a divorce or sickness. I started putting together these bags, I called them Bags for a Boost. And it really caught on.”

Pedroli met her future husband when the two were student-athletes at Bentley University in Waltham. She played basketball, while he played baseball. When they moved to Hopkinton, Michael, who was vice president of sales for a chemical distribution company in Walpole, soon became a beloved coach in town.

“He was extremely involved in the kids’ sports,” Kristen said. “He was very involved with Hopkinton Little League. In fact, there’s a bench at EMC Park dedicated to him because he made such an impact with a lot of the kids in Hopkinton that coached. Anyone who knew him, he just was so good with the kids. Any kid who was ever coached by him — and a lot of them were at his wake — he had a special way to coach, especially little kids. People loved him as a coach.”

Following Michael’s death, Kristen learned by trial and error the best way to navigate her new existence. The class she took helped identify ways she — and any parent, whether or not they were dealing with a traumatic event — could not just survive but thrive. She has incorporated that in her own program.

“A lot of the information was beneficial to really anyone who was raising kids in a difficult time. And that was before the pandemic even hit,” she said. “Our program is more in general raising resilient kids, but I bring in a lot of things that I did wrong with my kids that I learned through this class that I took. One example being allowing them to use their father’s death as a crutch, which I did a couple of times. I was told very sternly that no, you can’t do that. They need to deal with this, and you need to not allow it to be a crutch. It instead can help them be more resilient in life. So that’s one example that we talk about a lot — not fixing problems for kids or giving them an out. So it’s a lot in general, but we use a lot of real-life examples.”

Added Pedroli: “I worked with two social workers and we put together a curriculum. It’s called Raising Resilient Kids. We put together the curriculum and we decided to have a pilot last spring, but because of the pandemic we pushed it off. So we had it this fall. It was a six-week series. We met on my back deck, socially distanced. And it was amazing. We did evaluation forms after, and people just loved it. What we hope to do is run this series every fall and spring.”

As for the Bags for a Boost, Pedroli has a bin outside her house where people can donate items, or gifts can be shipped directly to her. She has a room in her house set aside for storing the donated goods, which include candles, tea, spa-related items, lotions, makeup, scarves and more for women, and decks of cards, socks, mugs, gift cards and more for men. 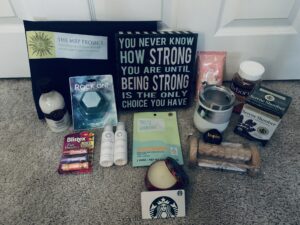 Then she ships them out — mostly in town and to surrounding communities, but occasionally out of state.

“Most of the time I won’t say no, but the focus really is Hopkinton and the surrounding communities,” she said.

Pedroli has since remarried — just over a year ago she wed her high school prom date, John Pierce — and her sons, Nick and Matt, now are 13 and 11. But no matter what changes might come in their lives, she made it clear that Michael’s legacy will live on with them.

For more information on The MRP Project, visit themrpproject.org.

Hopkinton Girl Scouts Troop 65040 spent part of Martin Luther King Day making Valentine’s Day cards for veterans, and they are encouraging others to do the same.

“Write a kind statement, thank them for their service, make some art, BE CREATIVE!!” the program poster reads.

Finished cards may be dropped in the bin outside of 14 Colella Farm Road for distribution. The deadline is Jan. 30.

Middlesex Savings Bank announced last month that it had distributed another round of funding from its charitable foundation’s $1 million COVID-19 relief fund. In this fourth wave of grant distribution, the Middlesex Savings Charitable Foundation provided 33 area food pantries — including Hopkinton-based Project Just Because — each with a $10,000 contribution to support their response to the pandemic. …

The Foundation for Metrowest announced last month that it had awarded grants totaling $150,000 to nine arts and culture nonprofits serving the region. Hopkinton Center for the Arts was one of the recipients, receiving a $25,000 grant. The 2020 Arts and Culture Grant Program was the largest sum ever awarded by the Foundation for Metrowest to arts and cultural institutions in a single year. The grants of up to $25,000 each are intended for general operating support, program support and capacity building efforts, enabling each nonprofit to pursue opportunities that will help improve the quality of life across MetroWest.