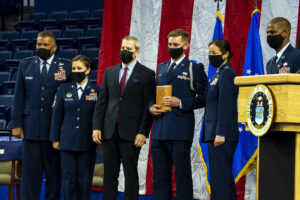 As he began his junior year at Hopkinton High School in 2015, Jeremy Szczepankiewicz wasn’t sure what he wanted to do after graduation. He just knew he didn’t want to follow the same path as most of his classmates.

“Hopkinton’s a very college-bound town,” he said. “Throughout high school there’s kind of the expectation that when you graduate you go to college. So, that’s what I was looking at doing. That’s what my parents did. That’s what my brothers did. But junior year rolled around and I was realizing two things. First off, I didn’t really know what I wanted to do. I wasn’t in love with anything. I didn’t want to go spend a lot of money to get a degree that I may or may not use. The second thing I realized is college is becoming exorbitantly expensive. … I didn’t want my parents to have to put me through college if I wasn’t sold on anything.

“So, rather than doing that, I thought I would take some time and go into the military and figure out what I wanted to do and find my passion there. When you serve for three years you get your GI Bill, and that lets you attend school for free. In the process of taking time to serve and figure things out, it also built discipline, because I wasn’t on a great path in high school, and the military really straightened me out.”

“At the prep school he has distinguished himself not only as a gifted writer but also as an exceptional critical thinker, whose participation in the classroom challenged and lifted his peers’ learning,” department head William Rogers said in presenting the award. “He achieved a 4.0 in English — the only student to do so this year.”

Szczepankiewicz’s journey started his senior year of high school, when he “really buckled down and said, ‘All right, I need to get on more of a path here and get more structure in my life.’ ” Inspired by his grandfather, Harry Roberts — an F-100 pilot in Vietnam who told Szczepankiewicz and his siblings stories of his experiences — Szczepankiewicz set his sights on the Air Force. He also had been intrigued by astronomy and aerospace engineering since a young age, encouraged by his father’s similar interests. “The sky was always something that fascinated me,” he said.

After a delay lasting a few months while he waited for medical clearance, he got a waiver for his asthma and started basic training in November of 2017, graduating with honors three months later.

He eventually was stationed at Joint Base Elmendorf-Richardson in Alaska, where he served as an aircraft fuel systems journeyman for F-22s, C-17s and E-3s.

The accolades continued to come for Szczepankiewicz, who received an early promotion to Senior Airman as part of the Air Force’s Below the Zone program. He also finished a two-year degree through the Community College of the Air Force in aviation science.

Along the way, Szczepankiewicz was named to his base’s honor guard, which led to many memorable experiences.

“We had a whole bunch of funerals — one active duty funeral, that was pretty tough,” he recalled. “Then there’s also lots of stuff in Anchorage going on — parades and ceremonies. Honor guard is pretty cool, because one thing I’ve always loved about the military is the tradition, and that’s really what honor guard is all about. You get tons of that when you’re with the honor guard.”

He recalled in particular one funeral in Sitka, Alaska, for a man who had spent approximately two decades in both the Air Force and Coast Guard. The service was a joint ceremony, and Szczepankiewicz’s honor guard helped train the Coast Guard detail for the event.

Szczepankiewicz continues to spend time in Alaska, in large part due to his love for the outdoors.

“I love hiking, rock climbing, fishing, kayaking, camping, you name it,” he said. “And the Catholic community up there is pretty vibrant, so I do a lot of stuff up here with them, with the church. I like staying in shape, biking, running, things like that. And I played a lot of pond hockey when I was stationed up there.”

Now he will turn his focus to the Air Force Academy, where he will begin basic training this summer. With no experience flying a plane, Szczepankiewicz is looking forward to learning — although that’s at least another year away. And he has a backup plan in place.

“You don’t find out if you’re medically qualified to fly until your junior year,” he explained. “So right now I’m going down a pre-law path, and if I find I’m medically unqualified I’m going to go the military lawyer route and finish up a degree in legal studies and apply for law school out of the academy.”

Not bad for a kid who as a teenager once struggled to figure out his calling.

“In high school I really didn’t have a whole lot of direction,” he said. “The military was pretty instrumental in giving me that.”

The Hopkinton Chamber of Commerce’s inaugural Restaurant Week last month was a big hit. Not only did the restaurants increase their business coming out of the pandemic, dozens of diners won $50 gift cards to the local establishments (check HopkintonIndependent.com for a full list of raffle winners).

“Everything went really well,” said Ostrander Insurance’s Paul Ostrander, one of the organizers. “We got a lot of positive feedback, both from the restaurants and the public. And we had a lot of corporate donors, so the restaurants did not have to pay for their gift cards. The business community really stepped up to help.”

Thirteen restaurants participated in the event, which will be repeated in a year, with some modifications.

“Next year will be a little more focused toward a traditional Restaurant Week, where the restaurants would have to have specials or a deal for diners,” Ostrander said. “This year was more focused on just getting people in the door, getting out to visit the restaurants that were hit so hard during COVID. We’re a small town, so that was really important for the community.”