Peter LaGoy has enjoyed the use of trail systems much of his adult life. From his early days growing up in rural Connecticut to his present position as chair of Hopkinton’s Trails Coordination and Management Committee (TCMC), the creation, maintenance and enjoyment of trails has become his passion.

A graduate of Georgetown University with both a bachelor’s and master’s degree in biology, LaGoy is well-versed in the impact environmental factors have on health concerns. He has been the principal at LaGoy Risk Analysis for the past 25 years and has worked on the cleanup efforts caused by gas plants.

While studying at Georgetown, one of his fondest memories was running along the C&O Canal in Washington, D.C.

“I really enjoyed the softer surface and the ability to run and let your mind wander, something that’s not so easy on single-track hiking trails,” he said. This is one of the places where he got the idea to incorporate stone dust into Hopkinton’s trail systems. 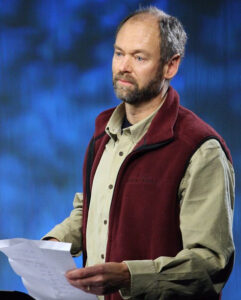 He noted that fellow Trails Coordination and Management Committee member Liisa Jackson upgraded the Center Trail in the early 2000s. It has been the closest experience he has found to the D.C. trail until recently, when it became increasingly muddy.

Hopkinton has two general types of trails, LaGoy explained, including single-track pedestrian trails and multi-use trails that allow access for bicycles and strollers.

The use of stone dust has been particularly helpful on the multi-use trails. This helps with joint impact for runners as well as soil deterioration near floodplains. Hopkinton has constructed almost two miles of multi-use trails using a stone dust surface, according to LaGoy. These trails are generally 8-10 feet wide.

Included are two sections of the popular Center Trail, which begins on Main Street, across from Hopkinton Lumber, and connects to the loop road that runs around the schools complex. The trail generally follows an abandoned rail line to Milford that was removed in 1950. Echo Trail, accessed from Granite Street, extends to the Milford town line. An Eagle Scout recently finished constructing a bridge on the Hills Farm Trail, located about a half-mile from 192 Hayden Rowe St., to facilitate pedestrian access.

“Liisa worked to get the stone dust on the Center Trail and improve pedestrian access,” LaGoy said. “Some of the trail surface had been challenging because of the roots and rocks.”

Donations from local contractors of the material allowed the project to be completed at about one-tenth of the projected cost. Work on trail improvements will continue later this year.

Work on the Echo Trail is “on hold for now,” he said.

“The town has many miles of pedestrian trails, with trails varying from easy, relatively level walking paths to some pretty strenuous trails,” LaGoy said.

The Upper Charles Rail Trail, the Hopkins Loop of the Center Trail and the Brook Hollow Trail are three of the more popular places to walk.

An avid runner, LaGoy has been running marathons since his teens.

“Living in Hopkinton, you almost have to run a marathon,” the 61-year-old joked.

With the COVID-19 pandemic shifting people’s focus to outdoor recreation, the interest in trails has intensified, LaGoy said.

“The recent report by the Growth Study Committee shows that land use is something that the community prioritizes,” he explained. “And we’re not making any more of it.”

As more development occurs within the Interstate 495 beltway and particularly in Hopkinton, there is an increasing effort to create trails and preserve open space.

There are two trails groups that are involved in trail systems support in addition to the TCMC, LaGoy said. Hopkinton Area Land Trust (hopkintonlandtrust.org), better known as HALT, is a nonprofit and a member of the Land Trust Alliance, a national organization uniting thousands of such entities across the country. It was founded in 1995 to protect and conserve the town’s natural resources.

“They work on acquiring land via open space development,” LaGoy said. “They are responsible for land under conservation restriction and work with the TCMC and a number of town boards and committees.”

The Hopkinton Trails Club (hopkintontrailsclub.com) is a volunteer group of residents who meet monthly to advocate on behalf of trail usage and conservation. Its volunteers also work on trail construction and management projects. The group held a walking tour of the Pratt Farms trails on May 16, which was attended by about 10 residents. One of its efforts, according to its Facebook page, is to raise money to help with the purchase land at Peppercorn Hill at the Upton-Hopkinton border.

“What organizations like these do is seek to buy land and not do anything with it,” he said. “It’s important to keep trails in the mind’s eye of the public.”

LaGoy regularly appears before the Conservation Commission to speak about upgrades to trails and ways to interconnect them. He announced at the May 11 meeting that the Hughes Trail restoration was “essentially completed.” One bridge needs to be added, but there was water on both sides where the bridge was going to be installed, making the land too unstable.

He also proposed two trails at one of his favorite areas to enjoy — the two fields at Whitehall Brook. Located near Fruit Street, the area is “quite pretty.” The trails would be located on town property. He compared these trails to the walking path by the Center School.

“It’s near houses but away from the houses, which is good,” he said. “Getting folks to know about it has been a mixed blessing. As more people discover it, it becomes less of a quiet spot.”

Another trail that recently received some upkeep was College Rock. It recently had a kiosk replaced and graffiti removed.