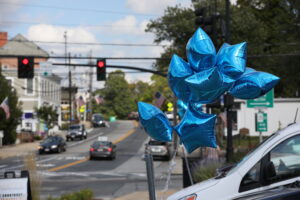 Blue balloons were placed around the town, including on Main Street, in tribute to Mason Lee, the Hopkinton 13-year-old whose funeral was Sept. 6 at Mount Auburn Cemetery. PHOTO/JOHN CARDILLO

Hopkinton suffered another tragic teenage loss of life this month when a 13-year-old died two weeks before he was to begin eighth grade at Hopkinton Middle School.

Sadly, this is not a new experience for the town, mourning someone’s passing at far too early an age. Mason Lee was at least the eighth school-age individual from Hopkinton to pass away since 2010.

The town paid tribute on Sept. 6, the day of his funeral, by placing blue balloons in front of houses and businesses.

Select Board chair Brendan Tedstone said it was uplifting to see the community unite in the saddest of times to support a grieving family.

“The silver lining in the cloud is when something tragic like that [happens] is to watch this incredibly resilient town come together and really pull for one of its own and the family that that person left,” Tedstone said at the Sept. 8 Select Board meeting. “With everything that’s been going on throughout the town, the state and the country politically, it’s very sad that it takes a small tragedy in a small town like that to really make us take a step back and reprioritize and come together as a town.

While the reaction around town was overwhelmingly positive, it must be noted that a few people chose to leave insensitive comments on a Hopkinton Independent Instagram post (the comment section eventually was turned off). However, it’s not clear if the commenters were even from Hopkinton, as they elected for anonymity.

That’s par for the course on social media, where some people have demonstrated a need to be as disrespectful as possible — no matter how sensitive the situation — in an apparent attempt to find pleasure in others’ pain. Residents who are willing to share their identities, on the other hand, have tried to drown out those negative individuals with a show of love and support.

“I tip my hat to the residents of the town who all of a sudden, when something like this happens, the blue hats and the red hats go away and we’re simply one community again,” Tedstone said. “And that’s what this town is all about and that’s what it’s always been. So, our condolences to the young boy’s family, and a tip of the hat to the town in coming together and doing the right thing for the right reasons.”

Town Manager Norman Khumalo credited the town’s Youth & Family Services Department for “helping the community go through this very difficult tragedy and very difficult time. I had a front-row seat to see at very close range the work that they’re doing to benefit the School Department, the town departments, Police and Fire. It’s amazing to see the great and fabulous work that both Dawn [Alcott-Miller] and Colleen [Souza] continue to provide to this community.”

Added Tedstone: “Dawn and Colleen, excellent job. The fact that those guys knocked it out of the park, the unfortunate part is because they’ve had to do it before and they’re familiar with these things. It’s very sad that they’ve become so proficient, but they are proficient and they’ve done a wonderful job.”

Select Board member Amy Ritterbusch noted that the Hopkinton High School Diversity Club’s Chalk About Change event — in which residents and town employees drew messages of inspiration and inclusion on sidewalks and driveways around town — was held two days after the teen’s death.

“I really appreciated the Chalk About Change event last week, and we kept in mind the child that had been lost at that time,” she said. “After the event was over I walked around town and I was so happy to see chalk at the library, the Town Hall, the Fire [Department] and Police [Department] and the schools. It was really lovely.”

South Asian Circle open to all

Following the Independent’s article last issue about social concerns and diversity in town, we heard from the South Asian Circle of Hopkinton, which was referenced in the story. The SACH wants to make it clear that, despite a large number of Indian members, it is open to all South Asians — and all other members of the community.

“We know that there are people from other countries out there, but it’s a lot less than Indians and Pakistanis,” SACH board member Charusmitha Ram said. Other countries in the South Asian subcontinent include Bangladesh, Sri Lanka, Bhutan, Maldives, Nepal and Afghanistan.

“We’re looking to connect with the larger community,” Ram added. “We’d like to build relationships with other residents, other organizations.”

All SACH events are open to everyone, and the club is hopeful more non-South Asian residents will start showing up to learn more about the South Asian culture.

“When people come for events we will explain to them the significance of the event,” Ram said.

Like most groups, the SACH has been limited in what it can do due to the pandemic. The organization is tentatively planning on a Diwali-themed event this fall where it would encourage residents to participate by placing lights in front of their homes. Diwali is known as the Festival of Lights. For more information, check the South Asian Circle of Hopkinton Facebook page.

Hopkinton’s Jeanette Corsini was named as a member of the Honorary Boston Marathon Team by the Boston Athletic Association.

According to the BAA, Corsini “has been a friendly face in the finish line medical tent at the Boston Marathon for over three decades. Jeanette has helped countless marathoners after they earn their Unicorn medal, while also leading a dedicated team of medical volunteers each and every year. Though she was not on Boylston Street this April, Jeanette has continued to help others through her work on the frontlines at MetroWest Medical Center serving in the Intensive Care Unit.”

The BAA unveiled the Honorary Boston Marathon Team from Aug. 26-Sept. 6, leading up to the Boston Marathon virtual experience (Sept. 7-14), when participants could run a marathon on their own and submit proof to the BAA to receive acknowledgment and prizes.

Looking for a few laughs while helping a good cause? The RE/MAX Executive Realty Charitable Foundation is hosting a Zoom Comedy Night on Thursday, Sept. 17, at 8 p.m. to raise money for local families in need.

The featured performer is veteran comedian Maher Matta, whose material is clean and appropriate for all ages.