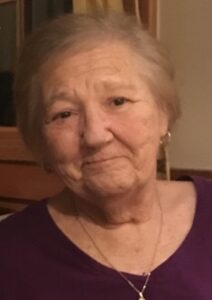 Joanne M. (Powell) Ouellet, 75, of Milford and formerly of Hopkinton, passed away Sept. 18 with her family by her side, after a short period of declining health. Born in Framingham, she was the daughter of the late Vernon and Irene (Shaw) Powell and is survived by her brother, Daniel (Ted) Powell and his wife, Diane, of Upton. She is predeceased by her husband of 34 years, James C. Ouellet.

Joanne was employed by Cushing Hospital in Framingham from the early 1980s until its closure. She then worked at Medfield State Hospital in the activities department, where she educated patients on gardening and planting.

Joanne had a deep affection for dogs, and this could be observed throughout her home. She would collect miniature sculptures of cocker spaniels and display pictures of her own dogs in every room. Her devoted spaniel Jack passed in 2016, and up until her passing she expressed wanting another dog.

Visitation will be held on Saturday, Sept. 26, from 9-11 a.m. at the Chesmore Funeral Home of Hopkinton. A funeral home service will follow visitation at 11 a.m., with interment to follow in Mount Auburn Cemetery. In lieu of flowers please donate to Cocker Spaniel Rescue of New England, LLC (csrne.org).