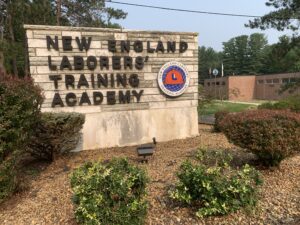 The Planning Board met for more than three hours Monday night, as representatives from the Massachusetts Laborers’ Training Center gave an overview of their site construction plans, which include a new headquarters building and an updated dormitory.

Attorney George Connors represented the applicant and gave a presentation on the plans for development of the 135-acre campus located at 37 East Street, which currently contains several buildings.

“At this point in time, the facility has become overcrowded,” he explained, noting that the curriculum for the students has expanded over time to include the handling of hazardous waste and gasoline.

The Conti dormitory, located at the front of the site, currently has 33 double-occupancy rooms. It is targeted for conversion into 45 single-occupancy rooms and expansion toward the street as well as near a fire pond, which Connors said will be dredged. The kitchen will be renovated and expanded as well.

There is a common septic system for all the buildings on the site. A new well by Laurel Canyon Drive will replace the individual wells, which Connors said only would be used for landscape irrigation. There will be stormwater mitigation measures put into place.

The proposed headquarters is where classes will take place. There will be offices for administrators as well as an amphitheater.

Nearby, the aptly named Crane Building will have a dirt floor and a high ceiling where students practice excavation with a crane.

“The area where the Crane Building is is a former gravel removal operation,” Connors said. “We chose that because it was fairly open, and it was fairly low on the site.”

He added that the intention was that the building not be intrusive to neighbors along Laurel Canyon Drive. In front of the building will be a flower meadow previously approved by the Conservation Commission on land that previously had been disturbed. That area had been populated by invasive species, which were removed.

Architect John Racine presented the renderings for the three buildings. The Conti building will be extended with a two-story residence addition, he explained. Because of COVID-19, the dining area will be expanded. There will be new carpets, ceilings and wallpaper for the existing building.

“We’re excited to move this project forward,” he said. “We’ve been working on it for some time now.”

The addition, Racine said, is at least 60 feet from the street, with a stone veneer. The siding of the stairwell will be made with aluminum composite material to “modernize it and bring the elements together.” There will be wood-like composite laminating used there as well as at the administration building.

The area, including the courtyard, will have a “campus-like feel,” according to Racine, “and the rooms where the students will stay during their week of training are “hotel-like.” There will be a workout facility as well.

The headquarters will contain a large classroom that can be divided with partitions. There will be a small café, an amphitheater, conference room and administrative space on the second floor. The lecture hall will have 75 seats.

“I’m super excited to see the investment you’ve made in the site,” said Chair Gary Trendel, noting the significant upgrades.

The Planning Board planned a site walk on Saturday morning.

Town Principal Planner John Gelcich noted that two permits are required: a site permit and a stormwater management permit. The only waiver requested is for sidewalks along the frontage of the property. He noted that most of the changes are internal to the site.

During the public comment period, concerns were brought forth by abutter Michael Rottas about the current conditions, including what he considered to be noise pollution and light pollution at night. He wanted to provide comments “in a constructive way.”

“One of the things we like most about living on East Street is the quietness,” he said, “especially when we always sleep with the windows open, even in the wintertime.” However, he said the existing fans hum throughout the night, and he asked for noise abatement.

The lighting was Rottas’s main concern.

“The lights are kept on all night, every night,” he said. “To say that the existing lighting is similar to Gillette Stadium is not an exaggeration.”

Phil Paradis of BETA Group, the town’s engineering consultant, said that three other plans previously submitted to the Conservation Commission should be included at the Planning Board’s next meeting, which include plans for the electrical system, the fire pond and the restoration area.

The hearing was continued until the next meeting on Monday at 7 p.m.

Trendel presented the results of a pedestrian connectivity survey, the other major topic of discussion. The objective of the web-based survey was to understand the preferences and needs that walkers, runners and bikers consider to be priorities. There were 368 respondents.

He stressed that this survey was not undertaken because of the current proposal for a MassTrails grant by the Upper Charles Trail Committee, which is holding a meeting Wednesday night.

“No surprise here, but more than 85 percent of respondents believe that more trails and sidewalks will improve both their mental and physical health,” Trendel said. Residents wanted investment in sidewalks and trails, both paved and gravel.

Runners and walkers preferred loops of three to four miles, while bikers suggested loops for them. Most users would like to use trails and sidewalks for fitness activities and to travel to neighboring communities. Eighty-six percent of respondents either strongly agreed or agreed that they avoid exercising near major roads.

The highest preference was for paved sidewalks and paths off the road, but all surfaces were considered.

“It doesn’t really matter what the surface is,” Trendel said of the results, “as long as they are not having to run in the streets.”

Trendel will bring the survey results forward to other boards and committees for feedback over February and March. After that, areas of focus will be prioritized, and public meetings will be convened.

In other news, the proposed land donation from the Chamberlain-Whelan development project was voted to be added to the Town Meeting warrant. The open space was promised as part of the approval of the subdivision. It was approved unanimously, although Trendel (an abutter) recused himself from the vote.

A procedural conditional approval amendment was endorsed in like fashion, as were related forms for the release of the 29 lots to be sold.

Also, the Turkey Ridge Estates conditional approval agreement was endorsed by all members.

← Letter to the Editor: School Committee should make masks optional for all students State Rep. Dykema to depart for job with clean energy company →