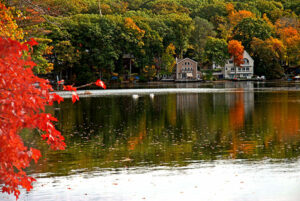 The Lake Maspenock Citizens Input Group is recommending the use of herbicides to combat weed growth.
FILE PHOTO/STEVE McGRATH

After years of protracted efforts to resolve the invasive weed problem, the Lake Maspenock Citizens Input Group is hopeful that a speedy decision can be made after it officially endorsed the idea of combatting the weed outgrowth by means of herbicides.

The purpose of the Weed Advisory Board, a panel of five members created by the town four years ago, is to look into all possible solutions to eradicate a strain of weed that is mostly affecting the north basin of the lake.

“Their job is to research all options: herbicides, mechanical harvesting and extended draw down,” said Sabine St. Pierre, a member of the executive board of the Lake Maspenock Preservation Association (LMPA).

St. Pierre said that the LMPA, a 250-member group that dedicates itself to maintaining the lake’s health and natural beauty, is not directly involved in the resolution process of the weed issue. She explained that town has been tackling the weed epidemic by “extended draw down,” a process in which the lake’s water level is lowered in order to expose the roots of the weeds to cold weather conditions, which will result in the plants’ ultimate demise.

The process, which had been effective for several years, was halted last year when it was discovered that the draw down was affecting the water supply of one lake resident in particular.

“They don’t want to hinder them from potentially losing water,” St. Pierre said. “Extended draw down will not continue to happen.”

St. Pierre said that mechanical harvesting was considered but is not a realistic option due to it being very labor intensive and tending to produce unpleasant odors.

“The [LMPA] board is supporting herbicides as a recommendation,” St. Pierre stated.

Jaime Goncalves, LMPA vice president and a member of the advisory team, also is convinced of the efficacy and viability of the herbicide option. He believes that all other options at this point have been exhausted.

“The morphology of the lake precludes us from using other treatment options,” he said.

Goncalves describes the herbicide option as being completely safe, indicating it will not have adverse effects on the profile of the lake, as weeds will be spot-treated and herbicides applied only to the immediate areas where weeds reside.

Also in support of the herbicide recommendation is a limnologist, or aquatic ecosystem specialist, who was hired by the town to help devise a plan of action.

A public hearing was held Nov. 18 in which the advisory board opened the floor to comments after a brief presentation.

“Overall, the public was in favor of the herbicide solution,” Goncalves said. “Between 60 and 70 people were in attendance at the meeting. Seventy percent of the comments supported the council’s recommendations.”

Final approval belongs to town officials, and a quick response is paramount since the application of the herbicide is time sensitive.

“The most effective time for the application of the herbicide is in the early growth phase of the weed, which is in the spring,” Goncalves explained.

Should this opportunity be missed, the delay of treatment could potentially be extended to the following year.