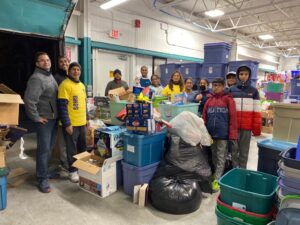 Volunteers show off the food they collected at Legacy Farms during the Diwali food drive they held last month.

This fall, Legacy Farms residents collected 1,300 pounds of food during a Diwali food drive. The food was donated to Hopkinton’s Project Just Because and Framingham’s Turning Point Shelter.

The initiative was led by Madhuri Waje, a core volunteer for Sewa’s Boston chapter. Sewa, a Hindi word meaning selfless service, is an international, Hindu faith-based humanitarian organization that helps all. In the Hindu belief, selfless service is at par with worship.

Waje got involved with Sewa (sewausa.org) about six years ago after learning about the organization from a friend who volunteered. Waje became even more active in Sewa during the pandemic. This year was Waje’s first time heading the food drive by herself.

“It has always been a passion since my childhood to help those in need,” said Waje. “In elementary school, I promised my friend that we would do some good work for society. It’s so good that it’s coming true.”

People of all ages volunteered, including 45 children, the youngest being 7 years old. Sanketh Udupa, a junior at Hopkinton High School, was a youth volunteer for the food drive, and he is a part of Sewa’s youth volunteer program, Lead. He started volunteering with Sewa after his parents and grandmother helped make masks with the organization at the beginning of the COVID-19 pandemic in 2020.

“I was really excited and proud that the organization was doing such noble work, and I also wanted to get involved,” said Udupa.

The volunteers informed people in Legacy Farms about the food drive and organized it with great precision. A youth volunteer was assigned to each street. They were responsible for handing out flyers and collecting food. Volunteers also set up donation boxes on their driveways.

“This way we could cover all of Legacy Farms, and no lane got missed,” said Waje. So many additional families volunteered to have donation boxes outside their house that flyers describing the food drive ran out of space to include the addresses for all the donation boxes.

“We kept getting houses that volunteered, and I had to keep reformatting [the flyer] to fit the addresses because we had so many houses that wanted to [help],” said Udupa.

After two weeks of collecting, the group took one week to organize all the food in a volunteer’s garage. All the donations were checked and tabulated. This year, pasta was a popular donation. Udupa was in charge of tracking the total pounds of food donated.

“It would not have been possible for me to do it without all the other volunteers helping,” said Udupa, “[as] 1,300 pounds is a lot of food.”

Just before Thanksgiving, the volunteers donated all the food to Project Just Because and Turning Point Shelter.

“All the young volunteers and all the other volunteers selflessly poured their heart into this food drive and worked hard from collection to even doing quality control on the food and organizing the different categories of food and packing it into boxes,” said Waje.