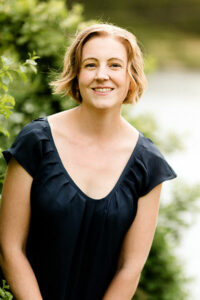 In her book “Strange But True,” author Kathryn Hulick, a new Hopkinton resident, encourages using the scientific method and smart thinking to explain the unexplainable.

As a young child, Kathryn Hulick dreamed of being an author. Curious and creative by nature, she was in awe of everything that seemed magical and mysterious. She penned her first novel in high school and honed her writing skills during her time at Colby College in Maine and work on campus as a writing tutor with ESL students.

Although she never intended to be a science writer, her fascination with science, mysteries and the unexplained whet her appetite and set her career path.

Hulick writes regularly for Science News for Students and Muse magazine. She has also published numerous nonfiction books for the children’s educational market on topics such as robots, video games, artificial intelligence, energy technology and dinosaurs.

“I love the theory of science,” Hulick admitted, “and encourage others not to just believe what they see or hear but to question and seek out reliable, valid scientific points of view, understanding that not all information is created equal.”

Most of all, she wants people to engage in the process of smart thinking, separating fact from fiction to explain the unexplainable, and have fun doing so.

“I challenge readers to develop critical thinking and use the scientific method of gathering and studying evidence to understand the world around them,” Hulick said. “It is important to be skeptical and ask questions, without losing your sense of wonder.” 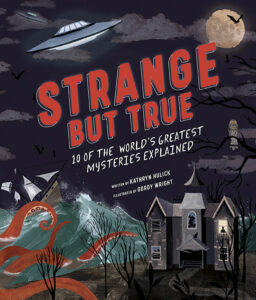 In the newly released “Strange But True: 10 of the World’s Greatest Mysteries Explained,” Hulick takes the reader around the world exploring and unraveling the mysteries of the Zonbi slaves of Haiti, secrets of an ancient Egyptian tomb, disappearances associated with the Bermuda Triangle, startling deaths of the Dyatlov Pass Incident in the Himalayas, and discovering the true form of the Kraken sea monster.

Readers will learn how sightings of flying saucers and stories of alien abductions can be explained by sleep paralysis, false memories and hypnosis. They’ll find out about pareidolia and how this psychological phenomenon may explain some ghost sightings.

Targeted for explorers as young as 10, “Strange But True” captivates one’s attention, engages the imagination and encourages questioning minds.

Vivid stories are beautifully illustrated by British artist Gordy Wright, whose haunting artwork sets the mood and sparks the imagination.

Hulick’s greatest writing challenges were being respectful of the cultures highlighted, being fair about the history involved and making her work exciting for readers. For each topic covered, she conducted numerous interviews, including scientists researching in the field and individuals who had gone through a given experience.

“Strange But True” was released earlier this month by Frances Lincoln Children’s Books, and Hulick offers more information about it on her website (kathrynhulick.com).

At the recent book launch in West Boylston, Hulick read from the introduction and told a story not included. She asked the audience to break into small groups, allowing opportunity to discuss, share experiences and offer other possible explanations of what could be going on.

“Not knowing is OK,” Hulick said. “There are so many mysteries in life that are still unexplainable.”

Other promotional events in the area include meet and greets at Enchanted Passage Children’s Bookstore in Sutton on Nov. 2 from 2-3 p.m. and Bedlam Book Cafe in Worcester on Nov. 8 from 7-9 p.m.

“Enjoy these mysteries. Feel free to dream about the possibilities of forces beyond those known to science, because an active imagination can lead to insightful ideas. But you must also practice the art of doubt,” Hulick warned, adding: “If you do this, you might just discover which mysteries are truly unsolved and which fantastic ideas could really be true.”