Lykan Bioscience is breaking new ground, and that ground is in Hopkinton.

This month the start-up — whose slogan is “Transforming the future together” — will debut what it calls a “first of its kind, multi-product CGMP [current good manufacturing practice] manufacturing facility for cell-based therapies.”

The company has renovated a 64,000-square-foot building at 97 South Street that serves as its headquarters as well as what chief commercial officer Jenifer Wheat calls a “state-of-the-art” facility where it works with biopharmaceutical companies to take their cell and gene therapy products from clinical trials through to commercial manufacturing.

“Part of what’s cool about Lykan is these products are so new and these companies are often smaller and focused on medical research, so one of the things we do for them is we’re investing the money in the facility for them,” Wheat explained. “We’re actually helping their ability to expand availability of medicines.”

Lykan’s mission is to provide its customers — the biopharmaceutical companies — with as many of their products as possible, ultimately making a positive impact on the health of individuals such as end-stage cancer patients. While many companies have treatments for certain cancers they do not have the ability to mass produce them. This is where Lykan comes in — manufacturing these treatments and then delivering them to patients.

“We want to help patients without access to this type of medication and help them live longer lives,” CEO Anthony Rotunno said. 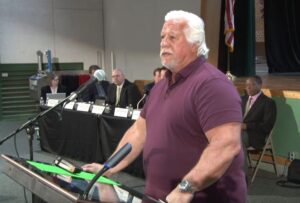 Lykan CEO Anthony Rotunno, shown speaking before Special Town Meeting in February 2019, looks forward to having his company be a “good neighbor” in Hopkinton.

Gene therapy is relatively new and continues to develop. Companies like Lykan hope to contribute to the success of this technology.

“Cell therapy is very important as it is the next generation of treating disease,” Rotunno said, adding: “We came into this business to change things for the good — transforming the future together.”

Rotunno already had four decades of experience in the pharmaceutical industry when in 2016 he began working with investors to form Lykan. He previously worked for other biologics manufacturing companies — including a few years at the same building Lykan now occupies. The building had been vacant for seven years before Lykan took it over last year and spent about $12 million to redo it.

Rotunno said he likes Hopkinton’s location for its proximity to Cambridge and Boston, where many potential clients are based, as well as its easy access to multiple airports. The region also is a hub for potential employees. “There’s such a load of talent here,” Rotunno said.

As part of its tax increment financing (TIF) agreement with Hopkinton (approved at Special Town Meeting in February 2019), Lykan, in exchange for tax breaks, is committed to hiring at least 125 employees within five years. However, Rotunno said the number likely will end up closer to 175-180.

If things go well, Rotunno said he already has a commitment to develop a neighboring building, and he hopes to add facilities in other areas of the country, possibly Arizona and Georgia.

In the meantime, the focus is on Hopkinton, where Lykan will hold a ribbon-cutting ceremony Sept. 15.

“The town has been very supportive,” Rotunno said. “Everyone’s been very welcoming. They’ve really been bending over backward for us.”

In return, Rotunno said Lykan is committed to making a positive impact in town.

“We want to be very community friendly — whatever we need to do to be a really good neighbor,” he said.