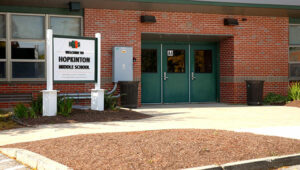 Under one proposal, Hopkinton Middle School could be joined with the high school to create a combined school for grades 8-12.
FILE PHOTO/STEVE McGRATH

The town could see a combined middle/high school campus sometime in the next 10 years as school officials get ready to present a plan for the future of the Hopkinton Public Schools.

During the Nov. 14 School Committee meeting, superintendent Dr. Carol Cavanaugh presented a “sneak peek” of the presentation that will be made on Dec. 5, which will reveal a plan developed from the findings of a capacity study done this fall. With the influx of students in the Hopkinton Public Schools over the past few years, and enrollment predictions continuing to rise over the next decade, space has become a huge concern for the district.

Although more details will be presented during the Dec. 5 meeting, Cavanaugh said that based on a number of factors, her department plans to explore the possibility of creating a large campus on Hayden Rowe. One of the projects would be to link the high school and middle school buildings to create one large school for grades 8-12.

“That would afford you a little more of the kinds of things that parents have asked for,” said Cavanaugh, referencing parents who have asked for higher level course offerings for their eighth-grade students.

Cavanaugh also mentioned the possibility of constructing a school building to house grades 2-5 while keeping grades 2-3 and 4-5 as separate “schools within a school.”

“But if all of those students [currently] in two separate schools exist under one roof, you could save a lot of money [on special education and English learner programs],” she noted.

Having a larger group of grades in one school also would save money on transportation expenses, said Cavanaugh, as the district would only have to pay for two tiers of busing instead of three.

Although a large undertaking, building a big school complex in one area could mean significant reimbursement from the state, and reconfiguring the remaining school buildings could help accommodate the predicted 1,000 additional students that will be coming into Hopkinton over the next 10 years.

“In an ideal world you might be able to have a 6-12 campus on this [west] side of [Hayden Rowe],” Cavanaugh said.

For those concerned about traffic on Hayden Rowe, Cavanaugh said that the architects have a plan to build a driveway that would take cars off of the main road to access the school campus.

“That would alleviate a lot of the traffic that is already there,” she said.

A project of this magnitude would not come to fruition in the near future, cautioned Cavanaugh, who stated a lot of pieces would have to come together first.

“You have to have a town constituency that says we value this and is something that we believe in and want to do,” she said. “I believe we could build something amazing here in Hopkinton.”

Several School Committee members voiced their support of the preliminary plan and thanked Cavanaugh for bringing it forward to a larger audience in December.

“I think this would be wonderful to at least entertain this notion as we go forward,” said member Meg Tyler.

Cavanaugh encouraged the community to attend the public forum on Dec. 5 at 6 p.m. in the high school auditorium to learn more about construction options for the future of the Hopkinton Public Schools.