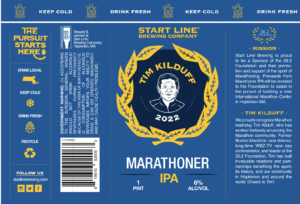 Tim Kilduff is featured on the can for the 2022 Start Line Brewing Marathoner IPA.

Tim Kilduff is widely recognized as Hopkinton’s can-do man when it comes to all things Boston Marathon. Hopkinton’s Start Line Brewing Company, recognizing Kilduff’s contributions to the race and the town, is making him its can man for 2022.

Kilduff’s image will grace limited edition Marathoner IPA cans, which are slated to go on sale at the Hayden Rowe Street brewery on April 13 and should last about two weeks, according to Start Line Brewing owner Ted Twinney.

“This is our Marathoner IPA, we make it every year for the Marathon using the same beer,” Twinney explained. “Each year we introduce a new special limited edition can, kind of a collector’s item and a way for us to recognize different people associated with the Marathon.”

Twinney said he looks forward to giving Kilduff “his day in the sun” to recognize all the work he has done.

“He’s such a humble guy, he said there’s many others who are worthy,” Twinney said.

Proceeds from sales of the IPA will go to the 26.2 Foundation — the nonprofit for which Kilduff serves as executive director. The 26.2 Foundation’s mission is “to promote and support the sport of marathoning,” and the organization is leading the effort to build the International Marathon Center on East Main Street.

Start Line Brewing also will host its annual Marathon Monday Cool Down Celebration from 2-8 p.m., featuring a live Tom Petty cover band from 3-6 p.m. Tickets, which cost $15, are available at the brewery’s website (startlinebrewing.com) and proceeds will be donated to the 26.2 Foundation. The event sold out last year and is expected to sell out again this month.

In recognition of the 126th Boston Marathon, the Hopkinton Center for the Arts is hosting a free exhibition titled “Coverage: The Boston Marathon As Reported By The Boston Globe” until April 23 at the HCA’s Lotvin Family Gallery.

This exhibition, which is available for viewing during the HCA’s normal business hours, includes a collection of curated Boston Marathon images through the lens of The Boston Globe, now celebrating its 150th year of publication.

The Boston Athletic Association recently announced a team of eight women who will participate in this month’s Boston Marathon, running in honor of the original eight finishers from the first official women’s field in 1972.

The honorary team is comprised of eight women who have made a powerful impact in areas from athletics to human rights. Among the eight women is Valerie Rogosheske, one of the original eight finishers in 1972, who returns 50 years later to once again cross the finish line on Boylston Street.

“I am so looking forward to returning to Boston this year with my daughters to celebrate 50 years of women being welcomed into the Marathon,” said Rogosheske. “In 1972, the students at Wellesley yelled ‘Right on, sista!’ On the 25th anniversary the students looked like my daughters, and this year they could be my granddaughters! I celebrate the progress through the generations as women claim their places on the start line.”

Joining Rogosheske on the honorary team are Mary Ngugi, Manuela Schär and Melissa Stockwell, each of whom will be competing at the front of the race as part of the John Hancock Professional Athlete Team. Football and soccer star Sarah Fuller, U.S. national women’s soccer team alum Kristine Lilly, Guinness world record holder Jocelyn Rivas and running activist Verna Volker round out the honorary team, which will be celebrated throughout race weekend at various Boston Marathon events and activities.

Thomas S. Grilk will transition to the role of senior advisor to the BAA after more than 11 years leading the Boston nonprofit as president and chief executive officer and more than 40 years of connection to the organization. Chief Operating Officer Jack Fleming will serve as acting CEO effective May 1 as the BAA’s Board of Governors initiates a search for a new CEO.

“It has been an enormous and gratifying privilege to lead the BAA and to serve with a magnificent group of colleagues who have been instrumental in the organization’s development and growth,” said Grilk. “These include my fellow staff members at the BAA; our Board of Governors; our relentlessly supportive sponsors; the Organizing Committee; public service, safety and medical officials; and the thousands of volunteers who come out every year to take care of athletes from around the world.”

← Letter to the Editor: LaFreniere for Select Board Reilly books trip to Boston to support library →