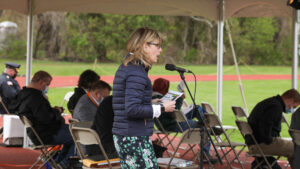 The schools had a good day Saturday.

Student enrollment growth prompted the need for both projects, school officials have said.

The Marathon School project, at a cost of $3,625,000, would add four additional classrooms.

The school was built to accommodate 600 students and now houses 620 students, schools director of finance Susan Rothermich said. “We are unable to fit the number of students that are before us,’’ she said. Art and health rooms are being used for classrooms, she said, with a family resource room possibly being usurped next year.

Resident Chris Wagner questioned why such a projected enrollment growth wasn’t factored into the original construction. The school opened in August 2018, just short of two years after construction began.

State school building requirements only allow current numbers to be considered when proposing a project, said School Committee member Joe Markey, who served as chair of the Marathon School Building Committee. The design was approved with room for future expansion, he said.

The project now goes to voters at May 22 election for a debt exclusion vote.

Elmwood School also has faced crowded conditions for years, superintendent Carol Cavanaugh said. The district has requested consideration for a new Elmwood School project from the Massachusetts School Building Authority for many years. After six unsuccessful attempts, the authority approved consideration of the project this year.

The school, which was built in 1964, does not have adequate space, Cavanaugh said. Children are being taught in hallways and on stages, she said, and classrooms have been subdivided in some cases.

“Elmwood is just too small,’’ she said.

The $1 million feasibility study will be funded by the host community agreement with Legacy Farms and would not impact taxpayers, she said.

“The spirit of that agreement was to address enrollment growth,’’ Cavanaugh said.

Voters also unanimously approved spending $3 million to replace significant portions of the roofs at Hopkins School and Hopkinton Middle School. This is a debt exclusion that moves to Town Election on May 22.

An HVAC upgrade for the middle school was approved at a cost of $350,000. This also is a debt exclusion that moves to Town Election.