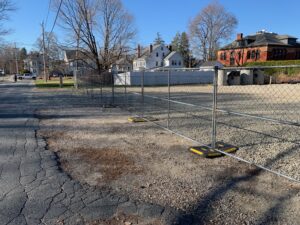 Fencing has been set up around the Carrigan Field parking lot on Marshall Avenue, where construction equipment and materials are to be stored for the Main Street Corridor Project. PHOTO/JERRY SPAR

A number of Marshall Avenue residents spoke out about the storage of construction materials for the Main Street Corridor Project at the Carrigan Field parking lot on their dead-end street, saying it would negatively impact the lives of small children and residents with disabilities.

Pam Loch, who lives on Marshall Avenue with her husband of 23 years, said in an interview that residents were only notified of the usage of the parking lot “two days before a community meeting about it.”

What was a major concern to her, Loch said, was having huge pieces of pipe and other construction equipment and the vehicles to move them going in and out of the lot from 7 a.m. until 3:30 p.m. “for the next two or three years.”

“They said that this would be a time-saving measure that could cut a year off of the project,” Loch said. “But realistically, I can’t see it saving more than a couple of months.”

Loch, who is legally blind, said she has concerns about being able to walk up the street safely. She also fears for the residents of the group home run by the Michael Carter Lisnow Respite Center that abuts her home.

“The clients walk up the street all the time to go to town,” she said. “I don’t think anyone thought about that. Even [last] week when my husband and I walked up the street, there were piles of dirt that had to be moved out of the way so that we could get by.”

In addition, she said she was worried about families with young children on the street and others, like herself, who have asthma. The dust from the last project exacerbated their breathing issues.

Some of these concerns were brought up and addressed at the March 17 meeting.

Khumalo said at that meeting that the property, while utilized by the Parks & Rec Department, is under the control of the town, which acknowledges “the level and depth of the concerns the abutters have about the proposal.”

Because of the issues residents had with previous construction work, Khumalo said the contractor will only be allowed to be on the site from 7 a.m. to 3:30 p.m. Vehicles will not be allowed to idle and will be requested to make only the minimal amount of trips necessary to complete a task.

Khumalo added that there will be a phone number provided for residents to call to report disturbances.

“We heard loud and clear from the neighbors about the issue of dust,” he added, noting that there has to be a dust mitigation plan in place with the contractor. A chain-link fence has been installed around the playground with a locked gate to guard the construction materials. The town has told the contractor that particulate matter cannot be stored on the site.

Department of Public Works director John Westerling said that the town could use gravel at the lot to help mitigate the impact of the dust.

“She — I’m not going to say was almost hospitalized — but her asthma was very acutely exacerbated at that point with the dust,” he said at the meeting.

He added that he has installed air quality and sound monitors so that he can provide data feedback on the current project.

McNamara’s other concern was the escalation of this area for use as a staging area for multiple years “with no real warning and no communications.”

“I think, from my perspective, I’m very concerned about hearing what the proposed use is and hearing some of our concerns be downplayed,” he said. During the previous construction situation, he alleged that residents’ concerns were “seemingly ignored” and nearly resulted in legal action by abutters.

“We’re very concerned about the proposal and the impact that it’s going to have on our family and our neighbors as well for the duration of the project,” added resident David Lopez, who noted that he and his wife have a 1-year-old and a 5-year-old.

“This noise and dust and activity are going to be in front of our house for pretty much the whole time this project is going on, if I understand everybody right,” he continued. “And that’s a very long time.”

Herr said many residents are being asked to make sacrifices.

“It’s going to be tough for everybody,” he said. “I’ve made it clear that I don’t really like the sign out in my front yard that says, ‘Construction. Beware.’ ”

Herr added that Town Meeting voted for the project to go forward, and that the town is obligated by the state to complete it because it is primarily being funded by the Massachusetts Department of Transportation.

“We don’t have a choice in the matter,” Herr said. “We need to do the work. We are contractually obligated to do the work. And part of that work is staging the materials along the corridor. If we don’t do it in this parking lot, it will be on Marshall Ave.”