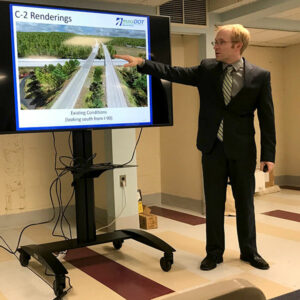 High project manager Jonathan Kapust from the infrastructure solutions firm HNTB discusses plans for renovations to the I-495/I-90 interchange during a meeting at Hopkinton’s Town Hall on July 25.

The interchange connecting I-495 and I-90, an area known for daily backups and weekly crashes, will see a redesign to meet current traffic and safety demands.

The project is being funded and directed by the Massachusetts Department of Transportation, and officials met with Hopkinton residents on July 27 at Town Hall to discuss their three design concepts for the new interchange. They also shared information on a fourth, preferred alternative drawing from the three base ones.

At the meeting, the first of four scheduled in the area, project manager Ryan McNeill of MassDOT outlined the need for the project.

“The good news is we got quite a bit of feedback,” he said, standing next to a projected slideshow. “And the even better news is that the feedback we got from the users of the interchange closely matched the analytical data that we had regarding congestion and safety.”

The designs proposed by McNeill and company emphasize “operational efficiency” and “safety” as phrased by consultant project manager Joe Cahill, from the infrastructure solutions firm HNTB. Main concerns include the layout of ramps, weave movements and space for vehicle merging.

All four concepts introduce changes to acceleration and deceleration lanes and replacing the highway bridges carrying I-495 over the Massachusetts Turnpike and Worcester rail line. A northbound auxiliary lane from I-495 to Route 9 also would help reduce “traffic friction between people coming on 495 from the northbound on-ramp and exiting on Route 9,” according to Cahill.

Concept 14-5’s key components include the addition of a flyover to the left of lanes on I-495 South and lessening the tight radius of curves on the northward ramp, which contribute to backups and can facilitate crash clusters.

Concept 22-3 meanwhile, introduces a flyover from I-90 eastbound to I-495 northbound to act as an acceleration lane merging onto the three-lane highway. Like the previous concept, 22-3 also eliminates some of the tighter loop ramps.

Concept C-2 attempts to eliminate high left-hand entering flyovers by replacing them with lower ramps that cross over the MassPike and go through the toll zone.

It was the last concept, C-2 that MassDOT selected as its preferred design to reach 25 percent design, which McNeill also called a base technical concept.

At that point, the department would prepare to submit the necessary environmental permits required for reconstruction. Wetland areas like the Cedar Swamp contain environmentally sensitive resources, so MassDOT wants to make certain those areas still have room to thrive.

At an estimated $160 million cost to users during construction, Concept C-2 proves the cheapest option to drivers on the interchange during its reconstruction period, which currently sits between 2022 and 2026.

McNeill said he does not expect much nighttime construction during the rebuilding of the interchange, citing the noise complaints from the Canton bridge project earlier this summer. On occasion however, night work may prove more feasible.

MassDOT’s next main step following the round of July meetings pertains to publishing an Environmental Impact Report (EIR) after sending a draft to the Massachusetts Environmental Policy Act Office for review. This report will be available to the public for those interested in the environmental consequences of the project.

Further details on the project and its timeline are available on the Massachusetts government website (mass.gov/massdot/495-90interchange) or by emailing 495-90improvements@state.ma.us. McNeill also said he also planned to have the slideshow from the meetings posted about in early August.