In the Massachusetts Department of Transportation (MassDOT) video public hearing on the I-90/I-495 Interchange Improvement Project, which was posted online Thursday, Hopkinton residents learned more about how the project will affect the community.

The 25 percent design hearing indicated that the Fruit Street bridge over I-495 will be replaced in order to accommodate interchange reconstruction. It’s anticipated that it would be stage constructed, with one lane open for alternating traffic during this time.

With this project — anticipated to cost almost $300 million — the MassDOT is looking to “improve the safety and operational efficiency at the system interchange of these two nationally and regionally significant interstate highways” as well as “address chronically deficient traffic conditions.”

According to the presentation, the interchange is one of the busiest in the state, with approximately half of all trucks entering Eastern Massachusetts using it. The crash rates on I-495 within the interchange are two times the statewide average, causing it to be identified as a high-crash and high-congestion location that does not meet current and future traffic demands. 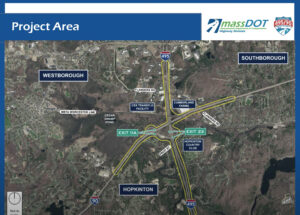 The project area includes land in Hopkinton, Westborough and Southborough.

After having a series of hearings that started in the fall of 2017 and receiving input from residents, MassDOT has settled on a proposed complete redesign of the interchange that features the following improvements:

Regarding the Fruit Street bridge, Jonathan Kapust from the design consulting firm HNTB Corporation said: “Additional improvements will include a sidewalk on the southern side of Fruit Street linking Huckleberry Road and Saddle Hill Road. Additional shoulder width is provided to facilitate construction without closing the bridge. The wider shoulders will be able to accommodate bicycles. A robust landscaping plan … is anticipated for Fruit Street to maintain the character of the roadway on either approach to the bridge. The replacement of the Fruit Street bridge is anticipated to need permanent and temporary easements to accommodate guardrail transitions, sidewalks and relocated utilities.” 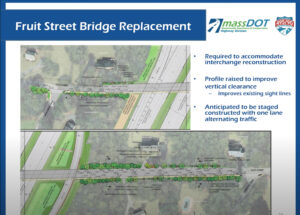 The Fruit Street bridge is to be widened and include a sidewalk and wider shoulders that bicyclists can use. 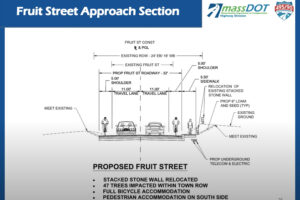 Looking at the project timeline, Joe Cahill from HNTB said: “Next steps for the project include environmental permitting, right-of-way acquisition and procurement of and contracting with the design builder. Construction is anticipated to start in 2022 with completion anticipated in 2027.”

Anyone interested in commenting on the current plan can do so in writing by July 23 via email (495-90Improvements@state.ma.us) or by postal mail to MassDOT, 10 Park Plaza, Boston, MA 02116, Attention: Highway Design Project File No. 607977. Letter writers should identify themselves by name and affiliation — abutter, local official or concerned citizen.