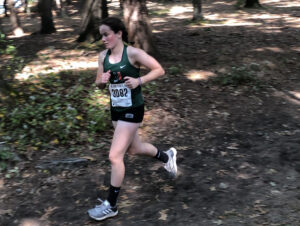 After running cross country and swimming for Hopkinton High School, Kayla McCann — now a freshman at Northeastern — set her sights on completing the Boston Marathon.

Kayla McCann has been thinking about running the Boston Marathon ever since her family moved to Hopkinton and she started seeing the seminal racing event depart from her town each spring. With the COVID-19 pandemic forcing the race to a virtual format, she had to adapt and maintain an upbeat attitude as she prepared to tackle the race in its new form.

“At first I was a little disappointed since it was my first marathon,” the 18-year-old said. “But you just have to keep a positive mindset.”

The recent Hopkinton High School graduate — now a freshman at Northeastern — said it was nice to get a brief reprieve from training when the marathon was first moved from April to September. She was in the middle of her high school swim season and balancing the time in the pool and the time on the pavement was a challenge.

When Patriots’ Day weekend rolled around, McCann ran a half marathon and biked a full marathon, just to get into the mindset of tackling 26.2 miles.

“There was a lot of change all at once,” she said. “I was finishing senior year and thinking about starting college. There was so much to look forward to.”

Like all the other virtual runners, she had to improvise what her marathon was going to look like for her run, which she was planning to do on Sept. 13. She said she was envisioning a run that would take her along the relatively flat Charles River trail over several loops around Boston, down the Esplanade and into Cambridge, around MIT.

“I am going to be running by myself, but I’m going to tell my family and my coach who has been helping with my training plan and she might bike alongside or in front of me for some of it to pace me,” McCann said. “That’s about it. I’m hoping there will be some people there cheering me on.”

McCann said she has been helped immensely by her coach, Kim Elia. She also spent the past several years running cross country at Hopkinton for coach Jean Cann.

Adding motivation for McCann in her first marathon experience is the fact that she is running for Canty’s Underdog Scholarship, which is offered in memory of Brad Canty, a member of the HHS class of 2018. Canty passed away in the summer of 2017 after battling gastrointestinal issues.

“He was a super-kind, super-outgoing guy who was really struggling,” McCann said. “I knew him well from the swim team.”

The charity will help raise money for other HHS seniors as they head off to college. Her desire to benefit the worthy cause has kept McCann motivated through the challenges of training during the summer.

“Running in the heat now is definitely really hard,” she said. “It’s hard to balance a summer job and other things I wanted to do this summer. Some days I have to get up at 4 a.m. to go for a long run because of the heat or something else I have that day, but I made it through.”

McCann said her goal was to break four hours this year. Having come to Hopkinton after living in Indiana and England for some time, the former Hiller is hoping 2021 will allow her to start the traditional race from her town.

“My charity organizer already said she has a bib for me next year because she wants me to have a fuller experience,” McCann said. “I’ll be running, for sure.”