Michael’s Run a celebration of inclusion 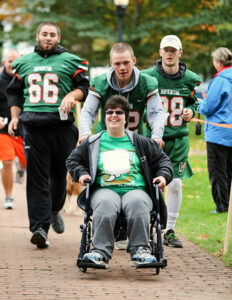 Michael’s Run, which benefits the Michael Lisnow Respite Center, will be held Oct. 19 at the Town Common. Pictured from last year’s race is Meghan Rafferty, being escorted across the finish line by Hopkinton High School football players (from left) David Quinones, Liam Buckley and Eric Davis.

A 5K road race in memory of a young boy who made everyone smile will bring smiles again this year to individuals with disabilities and their families.

Every October for the past 21 years, the Michael Carter Lisnow Respite Center has hosted as special fundraiser in Hopkinton. The race is in honor of Michael Lisnow, a young boy who, though he suffered from extensive brain damage, still brought joy to all who knew him.

“Michael was so special. He had the best laugh” said Mary McQueeney, co-founder of the Respite Center along with Michael’s mother, Sharon. “We still have volunteers here at the center who knew him from when they were classmates in fourth grade.”

Lisnow, as a parent of a child with special needs, and McQueeney, a special education teacher, shared a vision for creating a place that would provide emotional and physical support for families with children with disabilities. Their dream became a reality when they were given a piece of land in Hopkinton that would eventually become the Respite Center. It opened after Michael passed away in 1996.

For more than two decades, the Michael Carter Lisnow Respite Center has helped hundreds of families of individuals with disabilities with everything from emotional support to respite care for children, the latter which comes at a high cost.

Since the first Michael’s Run, the event has raised more than $40,000 for families in need of services. But more than the money it raises, the race is about bringing people of all abilities together for a festive celebration.

“It’s the most special 5K,” said McQueeney. “I have never seen such an amazing community event.”

Although the Michael’s Run is a traditional road race in the sense that there are prizes for the top finishers, the race also is inclusive, with many of Respite Center individuals participating as well.

“The ‘Respite Racers’ have been training all summer for this race. They are all ready to run or walk or to be pushed in wheelchairs,” McQueeney said.

The Respite Racers have the Hopkinton community behind them — sometimes literally, with people pushing them across the finish line.

“We have football players from Hopkinton High School who take turn pushing wheelchairs or walking with the racers through the course,” McQueeney explained, noting that it is not an easy feat considering the latter part of the course has a mini-Heartbreak Hill as it returns to the Town Common via Ash Street.

This year’s event will be held on Saturday, Oct. 19, rain or shine. Race day registration opens at 8 a.m. at the Town Common and the race starts at 10 a.m.

After the race there will be a barbecue, live music and fun for the whole family.

“This was what Sharon [Lisnow] wanted, to bring together all of the families to do something in Michael’s honor that will bring smiles to peoples faces,” McQueeney said.

McQueeney credits Respite Center event coordinator Ricardo Barraza for the hard work he has put in organizing the race for the past 16 years as well as members of the Hopkinton Running Club for donating their time to process race registrations.

“We couldn’t do this without them,” McQueeney said.

To register for the race or make a donation, visit the Michael Lisnow Respite Center’s website at hopkintonrespite.com.