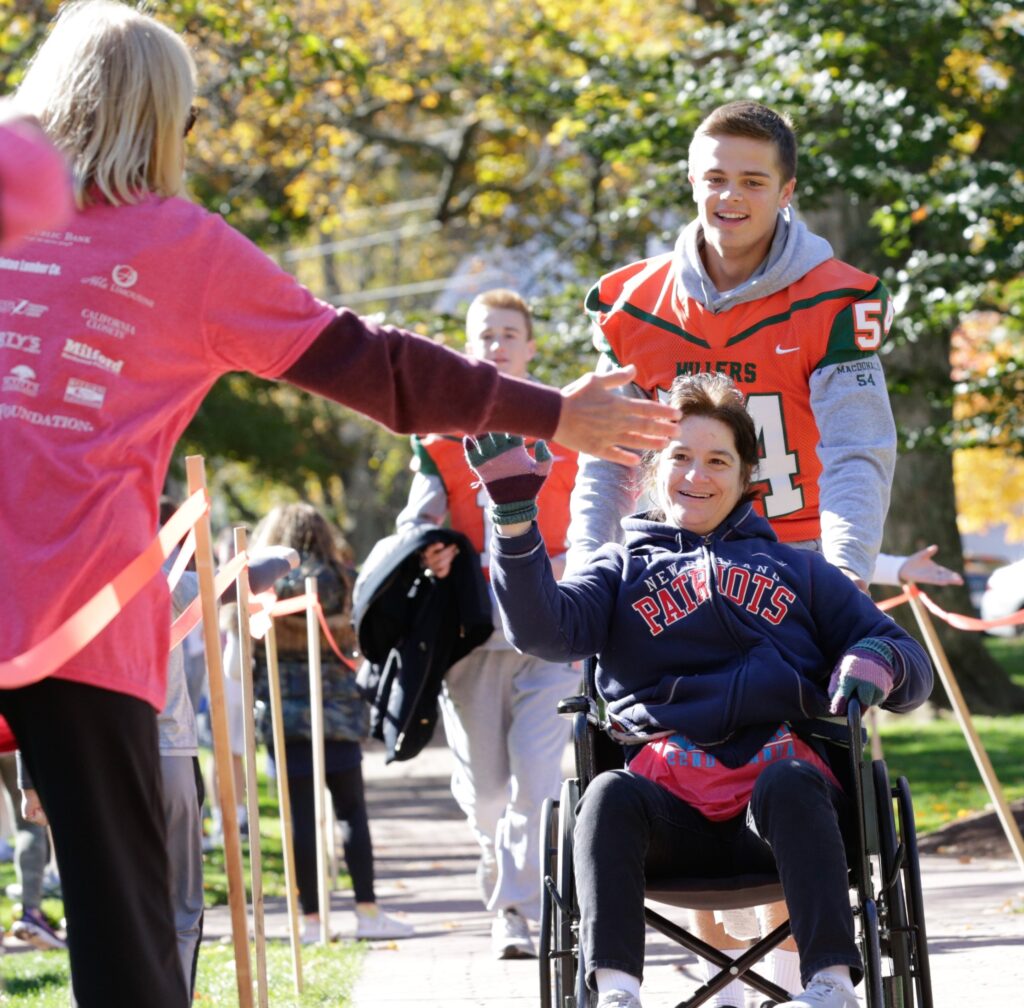 A spirit of tenacity, generosity and inspiration will be alive on Oct. 15 when Michael’s Run returns to Hopkinton.

The Michael Lisnow Respite Center was founded by Sharon Lisnow and Mary McQueeney and named for Lisnow’s late son, Michael, who was born with severe disabilities. Recognizing the challenges of providing constant care for Michael while trying to meet life’s many other obligations, Lisnow and McQueeney wanted to create a place families could take loved ones with physical or cognitive disabilities to learn and have fun; meanwhile, the family member could run errands, handle work responsibilities or just rest.

Moved by the endeavor and by the outpouring of support from their neighbors — and, no doubt, by Lisnow’s love and determination as well as Michael’s sweet nature — residents’ desires to contribute to something good continued to spread and grow exponentially. Businesses and individuals from all around town got behind the project, donating time and materials and recruiting others to help as well. Now, 25 years later, many of the current staff members got to know the program as high school student volunteers, or are friends or relatives of those who previously worked at or attended the center.

“That’s the best part of the Respite Center, I think — how much Hopkinton has embraced us and made us part of the community from the first day we got here,” Lisnow said.

Michael’s Run started shortly after the center opened in 1997, when a MetroWest newspaper approached Lisnow and volunteered to host the race; the center has organized it every year since. Now in its 23rd year (having missed the last two due to COVID), “We usually have between 300-400 people,” Lisnow said. While there is a race fee, Lisnow noted, it isn’t so much a fundraiser as a community event.

Attendees and staff of the center as well as family and community members walk, run or roll the 5K route, which begins at the Town Common, proceeds down Ash Street, turns right onto Blueberry Lane, takes a left onto Thayer Heights Road, and then returns up the hilly Ash Street. The Hopkinton High School football team gets in on the action, pushing participants who are in wheelchairs and manning water stations. The middle school team will be involved this year as well.

“It’s one of the most amazing events in town,” said longtime participant Allison Dacey. “If you live in Hopkinton and haven’t been to a Michael’s Run, you’re really missing out! There’s nothing like seeing the smiles of the individuals who attend the center when they cross the finish line.”

Dacey and husband Mark were just dating when her sister, Jennifer Gilman, started attending the center, which Dacey said is a home away from home for those it serves. Visitors can choose from an array of activities, such as art, bowling, cooking, even learning sign language, and also learn daily living skills. “Jennifer gets to be with people who love being with her and take great care of her,” Dacey said.

Dacey noted that she and Mark chose to move from Brighton to Hopkinton because of the impact Michael’s Run had on them: “We thought at that first race, ‘This is where we want to move.’ It felt like home,” she said. Flash forward a quarter-century later and they have four children — Emma (age 17), Patrick (15), Ryan (13) and Matthew (10) — “who are pretty much all beating me in the race now,” Dacey said with a chuckle, adding that her family does the run every year.

“My daughter started texting her friends every year to get them to come out,” Dacey said. “We really want to cheer on those who go to the center, and also to support this place that provides such incredible services in the most warm and loving atmosphere, with the best staff in the world. We’re so lucky to have them in this town.”

Michael Lisnow died in 1996 at the age of 10, shortly before the center opened its doors. More than 25 years later, it’s clear that his legacy lives on to affect countless others. It’s a legacy the Daceys are proud to honor.

“Michael’s Run is a celebration of Michael’s life,” Dacey said. “You feel it when you’re there. It was the love we felt that day in Hopkinton that made us want to move here … and I’m so glad we did!”

With the race having been on hiatus the last two years, Lisnow is hoping to spread the word that the annual tradition is back. (Details and registration can be found at hopkintonrespite.org/michaels-run).

“Our biggest request right now is for participants!” Lisnow said. “We’re just really hoping that, after two years of COVID, the community will come back out and support the run again. It’s one day out of the year that we take to step back and say, ‘Thank you, Michael, for all you’ve taught us.’ ”