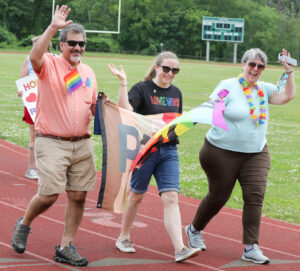 When Irfan Nasrullah was elected chair of the Select Board on June 1 — believed to be the first non-white resident to hold the top governmental volunteer position in town — it was not only a statement by Hopkinton but, in a way, a message to the nation.

The Pakistani-American’s ascension is a sign that anti-immigrant views don’t have a lot of support here, in a town that is becoming more and more diverse.

“That all started basically when [Donald] Trump was elected,” he recalled. “My thought prior to that was I don’t need to be involved because somebody else has my back all the time. When Trump was elected it was kind of a wakeup call that I do need to get involved, even if it’s at the local level. I thought it was important to put my face and name out there as a Pakistani-American, that, ‘Hey, we’re regular people, it’s not what the xenophobes are saying we are.’ ”

Nasrullah first was elected to a one-year stint on the Planning Board in 2017, then he ran a successful campaign for a Select Board seat. Last year, he was chosen vice chair. This year, Brendan Tedstone, the outgoing chair, nominated Nasrullah to be his successor, and the vote was unanimous.

“I was so thrilled to vote for Irfan as chair for many reasons; he is smart, thoughtful, reasoned, and obviously dedicated to this beautiful town,” Select Board Member Muriel Kramer stated. “That he is the first person to serve in that role who represents racial or cultural diversity is truly a bonus. And still that it has taken us until 2021 to get to that milestone is reason also to reflect that it has taken us too long to reach it. He has and will continue to bring so much we need to the role. It is a pleasure to serve with him.”

Member Amy Ritterbusch first served with Nasrullah on the Planning Board.

“I’ve found him to be very thoughtful and able to listen, be respectful and see both sides of any issue that comes up,” she stated. “I was very happy for him to take on the Select Board chair role this year. As Hopkinton has grown and is welcoming more residents of diverse backgrounds, Irfan has a valuable perspective as a child of immigrants and a person of color who has lived in Hopkinton most of his life. I think it is important for young children growing up in Hopkinton to see people like themselves who serve in leadership roles in town, no matter their ethnicity or gender, and feel confident that if they want to volunteer when they grow up that they can have a seat at the table too.”

Before moving to Hopkinton in 1981, when he was a high school freshman, Nasrullah had lived in Holliston. He said that as a youngster he did not have any issues fitting in — both in Holliston and Hopkinton — although because he attended private school (Bancroft), he didn’t have the opportunity to make as many friends.

“Even then, I managed to meet a few people around town riding my bike, and people would wave and come out to talk,” he said. “So, I’ve always felt Hopkinton to be a very welcoming town. That’s my personal experience. I can’t say what it’s like for others. My experience has been overwhelmingly welcoming. Even on the Planning Board and the Select Board, I’ve been welcomed with open arms, and everyone’s been eager to see me succeed.”

Nasrullah, who lives in the same house in which he lived as a teen — he and his wife bought it from his mother and have raised their two children there — attended UMass-Amherst and then got his J.D. from Golden Gate University in California and his Master’s of Studies in Environment Law from Vermont Law School.

After working primarily on environmental law — first for the government and then in private practice, “helping some of the guys I was beating up before” — Nasrullah now mainly focuses on real estate law.

His office is located on Main Street, a spot that has been directly affected by the Main Street construction. He’s taken to bicycling to work to avoid the traffic congestion.

He said his primary goals as chair will be to “see the Main Street Corridor Project through with the least impact possible” and help manage the town’s population growth.

And while he takes pride in his role as chair, he says it’s not because he looks different than those who came before him.

“It’s really not something I think about,” he said. “And I think it comes back to the fact that I feel so welcomed, that race has never been an issue. I suppose after it’s all said and done I will probably look back on it and be proud, like, yes, I was able to break that barrier. But I don’t think the barrier was inserted by anyone or any system. It’s just a reflection of the town. And the diversity of the town, as it changes, we’ll have more. I was just the first.”