For the first time since the beginning of the Hopkinton High School golf program, the Hillers will not have Dick Bliss as coach when the 2020 campaign begins. Bill Phaneuf is taking the reins after Bliss guided the team to multiple state titles and sent players to the professional ranks.

The new coach has his own experience as a golf pro and longtime teacher.

“I feel very lucky and fortunate to get the job and come to a program that’s had so much success and so many good players,” Phaneuf said. “It’s exciting to be a part of it.”

Phaneuf played golf through high school and college before turning professional and playing in mini-tour events. He described his success as “moderate,” but ultimately decided to make his living teaching the sport rather than playing competitive golf.

He worked as the head professional at a private country club in Connecticut and also ran and managed a public course in the Nutmeg State and owned a driving range.

“I have run the gamut of being in the business of golf,” Phaneuf said. “I think that’s what I have to bring to the team, a lot of experience playing the game competitively at every single level. I’m hoping I can impart some good things to the kids.” 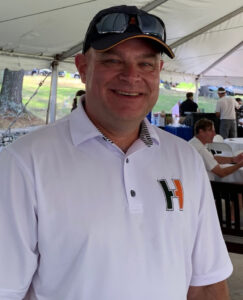 Bill Phaneuf is the new HHS golf coach, taking over for the legendary Dick Bliss.

Phaneuf was able to have some interaction with his new players before tryouts began, though not nearly as much as he would have liked thanks to the COVID-19 pandemic. As is the case with all sports, this fall golf season will be different than the norm. There are no scheduled individual or team tournaments at the end of the year, though some leagues are discussing organizing informal championship events.

Hopkinton’s schedule has been reduced to 10 total matches: five at home and five on the road. The Hillers will not play everyone from the Tri-Valley League, but will instead compete against five teams that are close geographically to make contract tracing easier if it is needed and reduce overall travel.

“It’s not the best-case scenario, but at least we are going to have golf and have a season and give the kids a chance to get out there and show what they have got,” Phaneuf said. “Some of the seniors are looking to play in college and this is the last chance they have to get some good numbers on the board.”

Senior Ryan Lundy is expected to be the team’s top player this fall. Phaneuf said Lundy has been playing well over the summer, typically shooting at or below par. Geoff Tocco and Teddy Henneberry will round out the top three in the rotation, Phaneuf said.

“I think our top six is going to be pretty strong, I think we are going to be in good shape,” the coach said. “It’s good but unfortunate that we are going to have a stacked team but not have a full season for the kids to prove themselves.”

Phaneuf said some of the players, including Lundy, have aspirations to play at the collegiate level. That will be on Phaneuf’s mind as he looks at his approach to the unusual season.

“We are calling this a showcase year,” he said. “We want to have our best players give it their best shot and get the best numbers they can out there so they have the best chance to move forward in their college years.”

With only five seniors on this year’s team and a large group of sophomores, Phaneuf said the future looks bright for the program as a whole.

“It’s important to make sure these kids are having fun on the golf course while being competitive,” he said. “We want them to learn the game and about being good human beings, too. That’s something I want to be focused on: doing the right thing and being good kids as well as good golfers.”