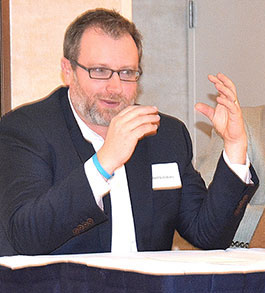 Matthew Lefebvre said he will bring a “no job is too small” mentality to his new role as principal of Hopkinton Middle School. “I believe in that old schoolhouse model that everyone here is really important,” Lefebvre said.

He added that he would bring an “element of visibility” to the principal’s position — interacting with staff and children in classrooms and hallways and ensuring students feel comfortable enough to approach him on any variety of topics.

“It’s really important to me to build well-rounded students who are actively involved in their education and take an active part in their learning,” Lefebvre said.

Prior to his move to Hopkinton, Lefebvre served as assistant principal at Westborough High School for nearly a decade and also was a music educator at Westborough’s Gibbons Middle School and in West Springfield.

Although he said he was not applying to numerous districts for administrative posts, Lefebvre recognized what a promising opportunity the Hopkinton opening could be.

Lefebvre takes over from Alan Keller, who was HMS principal for 12 years and left to become assistant superintendent of Auburn.

The new principal said he knew Keller and had great respect for what he had accomplished in the district.

He was also briefly acquainted with Superintendent Carol Cavanaugh when both served as assistant principals in Westborough.

Cavanaugh said she remembered Lefebvre’s “strong work ethic” when their careers crossed paths a decade ago. “I always admired that about him,” she said.

The superintendent noted that Lefebvre was one of 21 applicants for the position. In addition to the usual rounds of interviews by a search panel and central office staff, Lefebvre participated in an optional Zoom call with staff on a Friday afternoon in the summer.

Lefebvre said he was struck by the number of staff members who participated and “shared real-life experiences and philosophies” as well as “thoughtful, student-centered questions” during the call.

He said he was impressed with the depth of the interactions, and felt very welcomed by the Hopkinton staff.

He said he left the call thinking, “They wanted a leader who would take care of the school and be supportive of staff, and I plan to fulfill those [things].”

The new principal said he will bring an “upbeat, positive and enthusiastic” approach to teaching and learning and enjoys the “genuine enthusiasm” of the middle school age group.

“It’s such a special time when students are discovering who they are. … With that comes a responsibility to create a safe place for them to make mistakes and tell them it is OK,” Lefebvre added.

Cavanaugh said nearly a decade of experience as an assistant superintendent gives Lefebvre the tools he needs to take over the helm of a building.

She noted that he presented himself “articulately” during the job interviews, and his “passion” for ensuring kids’ emotional, social, behavioral and academic needs were met “came through loud and clear.”

In order to open communication with parents and families, Lefebvre said he is considering holding “principal’s coffee”-type events starting in mid-August either in person or online.

Lefebvre grew up in Connecticut and received his undergraduate degree from the University of Massachusetts Amherst and master’s degrees from Western Michigan University and Endicott College, where his focus was the organizational management/leadership licensure program.

The father of three daughters, Lefebvre said he and his wife and children enjoy going to the beach, hiking and “a lot of softball.” Most of his free time is spent coaching and playing in musical groups. Saxophone is his primary instrument.

He added that his goals as principal include optimizing the learning environment for all students and “making sure their days go better.”