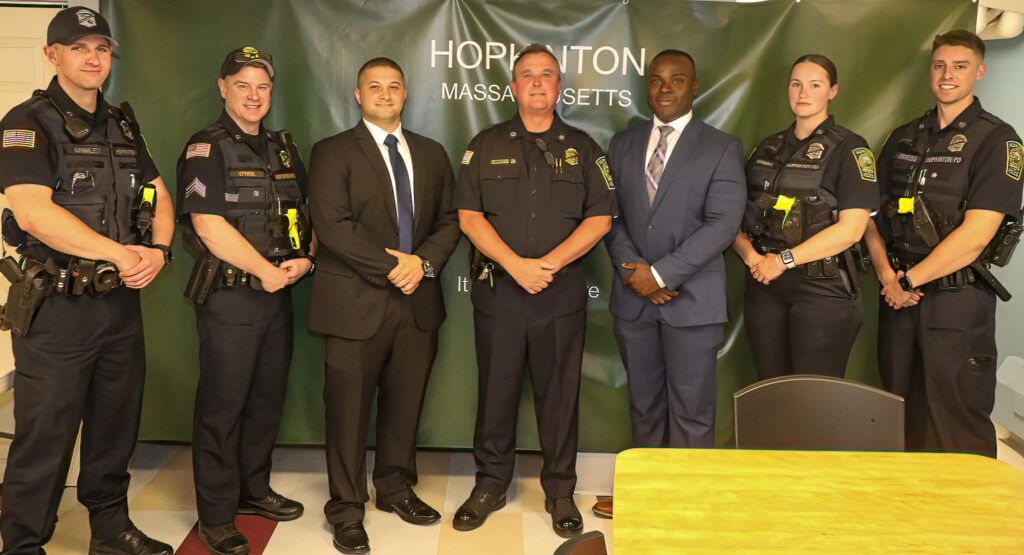 The Select Board approval process for police officer candidates generally moves quickly, but Tuesday presented a new scenario for the board.

One of the two candidates, Tyler Staback, had worked as a Massachusetts State Trooper since January 2019 until this past April, when he was dishonorably discharged after failing to adhere to the state’s mandate that troopers be vaccinated for COVID-19, he shared.

Staback explained that he attempted to claim a religious exemption to the mandate.

“I had to either go against my beliefs or stick through it to the end, through the trial boards,” he said. “They found me to not have religious beliefs and they terminated me.”

Added Staback: “It’s definitely unfortunate the way things panned out, but I have my own beliefs and I stood by them.”

During a round of questioning from the Select Board, member Mary Jo LaFreniere said she planned to abstain from the vote, telling Staback, “I object to your reason for being let go with the State Police.”

Staback said he was sensitive to people’s concerns and is careful around others, especially his family, including his 94-year-old grandmother.

“I take extreme caution being around my loved ones that may be susceptible,” he said. “I’ve been tested countless times, anytime I visit relatives. Many of my family have came down with [COVID] and had it previously. So, I don’t take for granted people’s perceptions of the whole situation. But I do what I can to keep those around me safe.”

Staback, who has a degree in criminal justice and served as a Marine for six-plus years, said he worked through the pandemic without any issues and never came down with the virus.

“When the order came out in the very beginning of the pandemic, when they had the lockdowns and things like that, I still had to go to work every day and be out in the public,” he said. “And it was a privilege to serve the public even during that time, even though there was a lot of unknowns.

“But then when the order [to get vaccinated] came out, nothing changed beside the date. Even leading up to my suspension, they were still forcing me on [double shifts]. It’s difficult the way things panned out. But they had me working wearing a mask, and if I was symptomatic staying home, getting tested, things like that.”

Added Staback: “There are precautions I would take to keep others safe, and that’s what I did for two years. So when that order came out it was just a date that set it in stone that kind of got things rolling in that case.”

Police Chief Joseph Bennett said he was comfortable with the decision to present Staback to the board.

“As the department head, we did a thorough background [check],” Bennett said. “And other than that instance, the decision he made, nothing came up. … He presents as a service-oriented person. Nothing raised any red flags on social media that that belief [to pass on the vaccine] was tied to anything other than the belief that he didn’t want to get it. We do not have a vaccine mandate in town. And we have employees that are unvaccinated. And we don’t ask.

“At my level, as a department head, I felt it was the appropriate thing to do to bring him forward.”

In the end, the Select Board vote was three in favor of the hiring, with LaFreniere and Irfan Nasrullah abstaining.

“I just would really like the opportunity to serve this community and I’m very eager to get back out there on the road and serve the public,” Staback said.

The other candidate, Alexander Stewart, was a patrol officer for the Springfield College Police Department from October 2020 until November 2021, before attending the Boylston Regional Police Academy.

Stewart, who has two young children, said his family is Lebanese and his father is Jamaican.

Asked about his interest in Hopkinton, Stewart said, “It’s a growing town that I want to be a part of.”