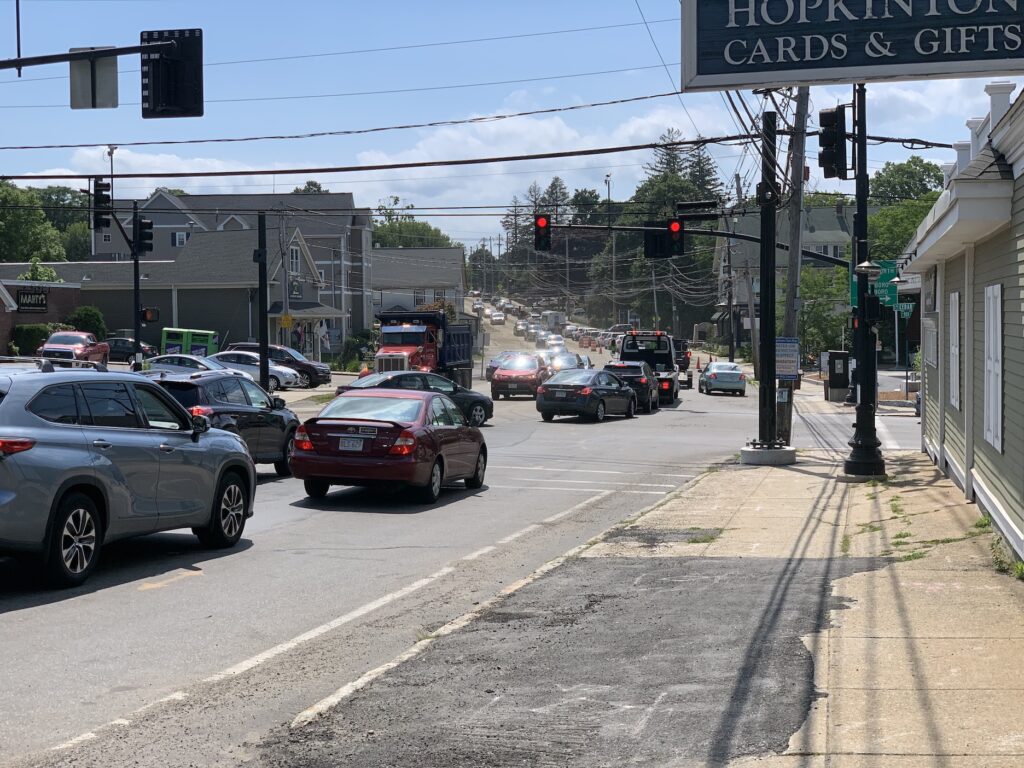 The Main Street Corridor Project came up for discussion at Tuesday’s Select Board meeting, with the board and town officials discussing possible ways the work could have less of an impact on downtown traffic.

Since the road was ripped up last week and one lane was closed to traffic, there have been periods with long delays getting into and through the center of town.

“As everybody has found out these last couple of weeks, at [8 a.m.] and [3 p.m.] that does horrible things to traffic in this area,” Town Engineer Dave Daltorio said.

Daltorio said the work is progressing quickly, due in part to extended work hours and work being performed this past Saturday. He said repaving work from the Wood Street intersection toward the Fire Station should start later this week.

However, the area from the Route 85 intersection to the Town Common will take longer to clear, he said.

“There’s some work still remaining from the undergrounding work to bring underground services from the center of the road to different buildings between 85, 135 and Ash Street,” Daltorio explained. “That work is commencing. The big push is to complete the undergrounding connections between the east and west side of 85 and 135. We’ve been talking about that for months on how possibly we could do that work while minimizing the impact to traffic.”

Daltorio has been having discussions with the contractor, A.F. Amorello, and he asked the board for its support in seeking alternatives to the traditional 7 a.m.-3 p.m. workday, including overnight work.

The board initially did not show support for night work out of concern for downtown residents’ sleep disruptions, but Daltorio said the area being considered would be at the 135/85 intersection, which is surrounded by businesses, and shouldn’t be nearly as loud as previous overnight work.

The board eventually voted 4-1 (with Shahidul Mannan in opposition) to approve Daltorio entering into exploratory talks with the contractor about ways to move the work forward more quickly, including the possibility of limited night work in commercial areas.

“I’m entirely open to moving this project more quickly and more efficiently, particularly in the choke points, and I’m also making a call to all residents, but especially those most affected, to be as patient as they can during this time,” Select Board member Muriel Kramer said. “We knew that this wasn’t going to be convenient. It’s a huge undertaking. And if there is a way to maximize efficiency and lower the impact — even though I know overnight is difficult for a certain few — I’d be open to what makes the best sense.”

Daltorio said he and his staff have been working with residents whose vehicles have suffered damage due to the road conditions — including from roadway dirt and dust — and noted that the contractor’s insurance company will cover the claims.

“We always feel there isn’t enough communication in some ways,” Mannan told Daltorio. “So, let’s think how we can make this a little easier.”

The board unanimously supported the calling of a Special Town Meeting for Aug. 18 in order to vote on a request for $850,000 in additional funding for the Marathon School addition.

The warrant is to be open until July 27 and then signed by the Select Board at its Aug. 2 meeting.

The sense of urgency comes because construction costs have been steadily rising, and any delay could lead to substantial increases. The current bids are only guaranteed through August.

If the project was pushed off to the spring, cost estimators predicted the possibility of $600,000 in additional costs.

The cost to hold a Special Town Meeting is approximately $6,000, Select Board Chair Amy Ritterbusch said.

If the additional funding is approved, the source of the funds would be addressed later. One possibility is money allocated to the town as part of the Legacy Farms development.

Josh Grosetti, the town’s IT director, shared results from the recent Annual Town Meeting survey. Grosetti said there were 434 submissions, which he noted is a high response number.

A slightly higher percentage of people indicated they would be more likely to attend on a weekend than not.

There was substantial support for a consent agenda to move the meeting along more quickly, as well as electronic voting.

Town Manager Norman Khumalo said he could meet with the town moderator to discuss adapting some of the smaller changes, and, “We may consider a much more wider public process” regarding the potential for more substantial changes.

Director of Public Works Director John Westerling shared that the most recent readings for PFAS in the town’s water supply came in just below 20 parts per trillion, the number at which the state requires a mitigation plan.

The town will continue with its mitigation process, as the water tested above 20 parts per trillion for multiple months previously, and there isn’t much wiggle room with the current numbers.

“We’re cautiously optimistic, however those numbers could continue to rise,” he said. “They could fluctuate low, high. If you look at the quarterly average for April, May and June we’re only at 19.5 parts per trillion, so we’re just a whisker under the maximum contaminant level.”

Representatives from Hopkinton are scheduled to attend a public meeting with Southborough officials July 18 to discuss Hopkinton’s desire for a Massachusetts Water Resource Authority (MWRA) connection, which would go through Southborough. 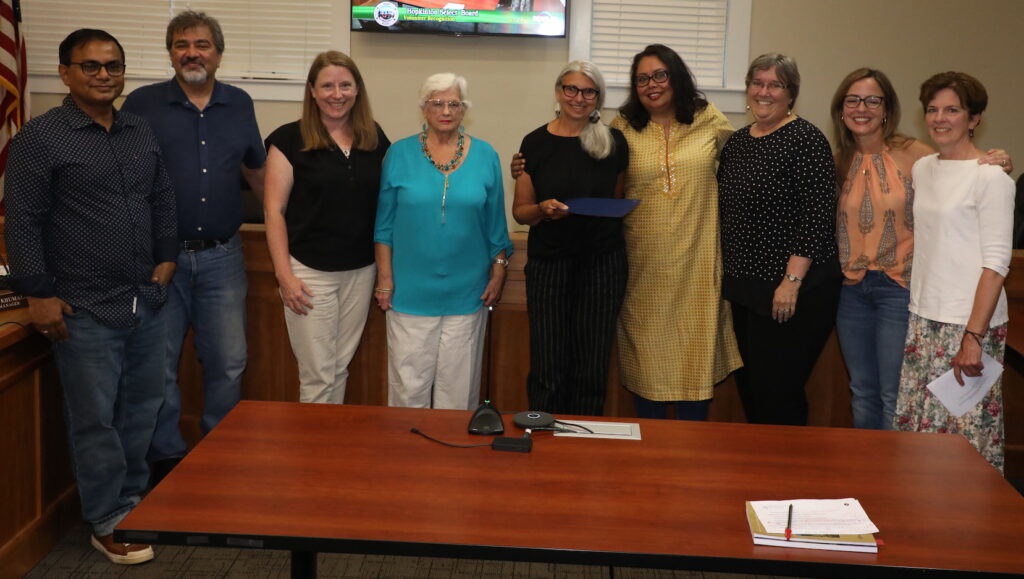 Cheryl Perrault was recognized for her service to the community as she prepares to move out of state.

Perrault, an author and teacher, hosted programs on HCAM including “Meet Your Neighbor,” “Wake Up and Smell the Poetry” and “True Storytelling.” She also led and participated in community events focused on justice and peace.

“Her style is love, peace and finding common ground,” said Meena Bharath, who nominated Perrault for the recognition. “It’s very rare to have those qualities, be so highly qualified and yet be so humble and present for individuals. Another key aspect that I have found of this change agent is that she inspires one to reflect.”

Richard Corcoran was recognized for his work as a firefighter following his resignation after 15 years with the town. …

The board accepted the resignation of Olivia Sward from the Sustainable Green Committee. Sward, who graduated from Hopkinton High School in the spring, is headed to college in another state.

Later in the meeting, Sustainable Green Committee members Linda Chuss and Amy Groves requested that the committee’s charge be modified to include at least one youth member (19 and under), and it was approved.

The board continued making numerous committee appointments, a process that started at the previous meeting.

Khwaja Ehsan, Stacy Spies and Nanda Barker-Hook were appointed to the Historical Commission.

Ehsan also was appointed to the Tax Relief Committee.

Mark Logan was appointed to the Capital Improvement Committee.

Jim Ciriello was reappointed to the Conservation Commission.

Adam Munroe and Tab Kadlik were reappointed to the Marathon Committee.

Nancy Peters was reappointed to the Open Space Preservation Commission.

Patricia Sinacole was reappointed to the Personnel Committee.

Charles Dauchy, Krisanne Connell and Linda Chuss were appointed to the Trail Coordination and Management Committee.

Vasudevan, Ashley Fogg and Asha Sherring were named to the Youth Commission.