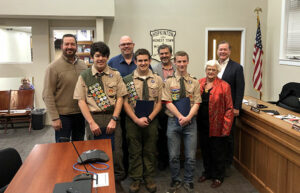 Eagles Scouts honored at the Dec. 17 Select Board meeting were (from left) Ryan Canfield, Andrew D’Alleva and Ethan Ritterbusch. They are pictured with Select Board members (from left) John Coutinho, Brendan Tedstone, Irfan Nasrullah, Mary Jo LaFreniere and Brian Herr.

The Hopkinton Police Department’s K9, Titan, was commended at the Jan. 7 Select Board meeting for his work rescuing a woman in Milford.

Hopkinton Police Chief Edward Lee shared a letter from his counterpart in Milford, Michael Pighetti, which detailed the heroics of Titan and his handler, Officer Brian Sanchioni.

On Dec. 20, at approximately 10 p.m., the Milford Police Department received a call about a female who had left her home and had not returned.

Wrote Pighetti to Lee: “Your K9 responded within minutes. At approximately 10:30 p.m. Officer Sanchioni and Titan located the female some distance away, lying under a tree, in obvious physical distress, as she was improperly dressed for the existing conditions.”

With the temperature at 17 degrees, the woman was transported to the hospital to be treated for hypothermia.

“If it was not for Officer Sanchioni’s immediate response to our call and the specific training of K9 Titan to search for the missing person the incident quite possibly may have ended with tragic results,” Pighetti wrote. “Therefore, on behalf of the entire Milford community I wish to commend Officer Sanchioni and K9 Titan for their swift actions which may have very well saved the life of a young female who was in desperate need of assistance.”

Lee lauded Sanchioni for his efforts training and working with Titan.

“He puts in a tremendous amount of hours and he is totally dedicated to this endeavor,” Lee said. “A lot of responsibility. He’s pretty much with the dog 24/7, the dog goes home with him at night. They are a great working team.”

Sanchioni deferred credit to his companion. noting, “It’s his nose that works, not mine.”

“I just get to hold the leash,” he said. “It’s an honor for me to be able to watch him work. It’s something we enjoy doing every day. Our department is very supportive of us. We are not always around, we have to spend a lot of hours for training. But that training is so when we go to calls like this, to me and him it’s just another training day.”

The long-delayed project to improve the intersection at Hayden Rowe and Chestnut Street took a big step forward when Verizon finally adjusted the wires and removed the utility poles.

New full-service traffic lights were set up late in 2018, but the project suffered two lengthy delays while the town waited for Verizon to do some work. Jersey barriers lined the intersection for months.

The town’s contractor was due to return earlier this week to remove the barriers and pave the shoulders where the road was widened.

“The majority of the work is complete by the town’s contractor,” Department of Public Works director John Westerling told the Select Board on Jan. 7. “In the street we’ve been waiting for the poles to come down. The only work we have left to do is mill and overlay — to take off the pavement that’s there and put in new pavement — and re-stripe it. The lights are already up overheard, they’re already activated and ready to go.

“As soon as the weather breaks in the spring, then our contractor will remobilize … to complete that project.”

Jessica Ferreira was confirmed as the town’s newest police officer at the Jan. 7 Select Board meeting.

“Ever since I was a kid I knew I wanted to be a cop,” she told the board.

Ferreira chose Hopkinton despite being offered a position in her hometown.

“Everyone I knew always said great things about [Hopkinton],” she said. “I never heard one negative thing.”

The board also confirmed the town manager’s appointment of resident Kimberly Carson as the outreach coordinator in the Senior Services Department.

At its Dec. 17 meeting, the Select Board set Monday, Feb. 3, as the date for a Special Town Election to vote on debt exclusions for the three capital articles related to the school expansion projects that passed at Special Town Meeting on Dec. 9.

Question 1 addresses the high school, Question 2 is for Elmwood School, and Question 3 deals with the Hopkins School.

Meanwhile, Feb. 3 also is the day the warrant will close for the Annual Town Meeting, which is scheduled for May 4.

Greyhound Friends announced in mid-December that it had welcomed its first three adoptable dogs since the facility re-opened in the fall.

Amy, Atttie and Molly made their way to the Saddle Hill Road kennel on Dec. 15 in preparation for their transition to permanent homes.

“These three are former brood mamas, 8-9 years old and looking forward to the next phase of their lives as cherished pets,” the organization posted on its Facebook page. “They will all need some vetting before they can go home, so we expect that they’ll be with us for a little while.”

Greyhound Friends also announced that it reached its Reopening Reserve Fund goal, taking in $50,000 in contributions.

Dog licenses are available for the 2020 calendar year. All dogs over 6 months of age are due to be licensed for Jan. 1, 2020 (2019 licenses expired Dec. 31). Licensing must be done on or before April 1 to avoid paying a $25 late fee. Residents may license their dog online (hopkintonma.gov/departments/town_clerk/certificates_licenses_fees.php), by mail (using the stub at the bottom of the annual census) or in person at the Town Clerk’s Office in Town Hall.

The fee is $15 per unaltered dog and $10 for all spayed/neutered dogs. Proof of rabies vaccination is required, along with a certificate verifying that the dog is spayed or neutered (unless that was already submitted).