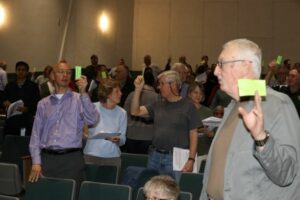 Residents stand up to vote during the first day of Town Meeting on May 6 at the Hopkinton Middle School auditorium.
PHOTO/JOHN CARDILLO

A total of 24 articles were voted on the first night of Hopkinton’s 2019 Annual Town Meeting on May 6 at the Hopkinton Middle School auditorium, some with little or no discussion, and others that brought several residents to the microphone with comments both for and against.

“And now we will slow down a little bit,” Town Moderator Tom Garabedian said as he introduced Article 10, the FY2020 operating budget — “$92.7 million, someone must have a question.”

Questions ranged from whether or not the maintenance budgets for the schools would serve the town well in the future to why the town’s salary increases seemed high. Generating the most discussion was language related to the underride included in Article 10 that asked voters “to support, as a non-binding resolution, an affirmative vote on the upcoming ballot question to reduce the amount of the real estate and personal property taxes to be assessed for the upcoming fiscal year (the ‘underride’).”

When asked why the underride was included in the budget, Town Manager Norman Khumalo responded that it was appropriate to discuss it since it is related to the budget. He did, however, point out that the vote at Town Meeting would have no effect and that the underride needs to pass at the ballot. In the end, an amendment by Mary Ondrechen was made and passed to delete the non-binding resolution language before Article 10 was passed by a clear majority.

Other controversial articles included Article 23, which requested money for Phase 2 of the Sidewalk Master Plan — it failed, as residents balked at spending more than $1 million, with the majority of that budgeted for sidewalks on West Main Street by the Interstate 495 ramps  — and Article 24 for $300,000 for a school bus parking lot on town-owned property behind the high school — it passed.