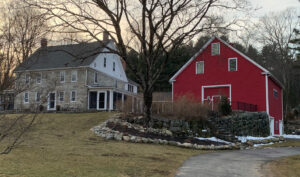 The owners of this home and barn at 47 East Main Street are seeking permission to rent the property for private events. PHOTO/JERRY SPAR

The owners of 47 East Main Street, which includes a historic stone home and 2,000-square-foot barn, are seeking a variance from the Board of Appeals to rent out the property for private events — such as weddings — after being issued a cease and desist order from the town’s zoning enforcement officer.

Harry Roberts and Anna Dorcey, who live on Connelly Hill Road, own the property — which they refer to as 1790 Stone Manor — and listed it online as being available for private functions. They indicated the barn was newly renovated and includes a bar area, a large service kitchen, an interior balcony that could be used by a DJ, and space for dinner and dancing, with a capacity of 100 people.

Charles Kadlik, the town’s zoning enforcement officer and director of municipal inspections, sent the couple a letter on Oct. 21 of last year reminding them that before they purchased the property they were informed that events for profit were not allowed by right or by special permit based on the zoning laws for a residential district.

“The reasoning behind this is that since it is a residential district, not business or industrial, your neighbors should not be subjected to the traffic, noise or any other annoyance generated by the letting of the barn space for these events,” Kadlik’s letter read.

Kadlik also noted that photos provided by the owners appeared to show “significant work” had been done on the interior of the barn “without the benefit of required permits.”

The owners started an online petition that had 533 supporters as of March 2. In an update on the petition webpage posted Feb. 28, Dorcey wrote that the Board of Appeals might vote on the variance at its March 9 meeting “if all goes well” but expressed pessimism about it being approved.

“We’ve had to agree to several stipulations to make this happen, however, we do not seem to have enough support of the Board of Appeals members,” she wrote. “It is unfortunate as they don’t seem to think this is a need for the town, or that our property would meet the standards of a variance. We are now exploring what our options are for the property, but it [is] likely we will not be able to keep it as is, unfortunately.”

← Tales from a Townie: Hanny and The Chimney Hopkinton Today: Tuesday, March 8 →