Tales from a Townie: Hanny and The Chimney 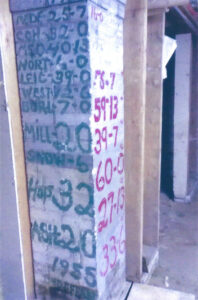 The chimney in the basement of 88A Hayden Rowe Street still has the scores from Hopkinton High School football games played decades ago. PHOTO/ALICE HAMILTON

This story evolves from doing research for my article on the undefeated 1955 Hopkinton High School football team (Hopkinton Independent, Nov. 24, 2021).

I needed the scores of the football games from 1955, and I had three yearbooks from Hopkinton High School, but not the one I needed: 1956.

I went to the Hopkinton Public Library and found the 1956 yearbook. I turned to the football team page and there was a picture of the team and the word “UNDEFEATED” over it, but no game scores. Every yearbook I have ever seen shows the football scores, but not this one!

I figured the library might have microfilm of old newspapers from 1955, but no. The librarian gave me the names of libraries in Milford and Framingham where they have extensive microfilm in their archives.

Driving up Hayden Rowe, I got to thinking. Back in 1955, Jack “Hanny” Hanifin was the custodian of the AA Clubhouse. Hanny was a fixture at the ball field. He had moved and cared for the old baseball and football fields, and even umpired baseball games. Since the new high school had been built, his domain had shrunk to the old AA building and the lawn around it.

Now, here was my thought: When we returned on the bus from our games, the score of the game we had played was already painted on the chimney of the old AA Clubhouse. Apparently, someone phoned Hanny at game’s end, and he would promptly letter the chimney.

Again, I got to thinking, I wonder, just maybe???

Now, over the years, the AA Clubhouse at 88A Hayden Rowe has been reinvented for many uses. It is used now as offices for Youth Placement. So, I went down to the old AA Clubhouse and rang the bell until someone let me in.

I found the old cellar stairs, and, with flashlight in hand, opened the door, turned on the light switch and went down the stairs. Lo and behold, to the left of the stairs stood the chimney with the scores still there.

AMAZING!! After 66 years, with all that has happened in this world, there, undisturbed, like someone had just shut off the light and left the area, stood The Chimney.

Thank you, Hanny, for helping me complete my story — and write another one.