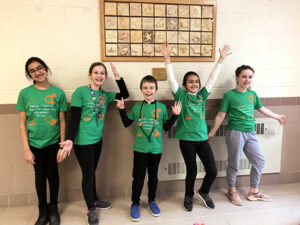 Two Hopkinton Destination Imagination teams will be headed to a global tournament in Kansas City this month after their presentations took first place at the state level competition.

The Hoplinks team (Grades 4-5) and the (AM)2 team (Hopkinton High School juniors) will be representing Massachusetts in the May 22-25 event that will bring together more than 1,400 of the top scoring DI teams from across 45 states and more than 14 countries.

Destination Imagination is an international nonprofit organization whose purpose is “to inspire and equip students to become our next generation of innovators and leaders.” Each year, teams are presented with a challenge in one of five categories — technical, scientific, fine arts, engineering and service learning. Teams choose a challenge in September and get to work solving that challenge using teamwork, creativity and ingenuity skills.

The Hoplinks — fifth-graders Saanvi Gupta, Eleanor VanDeusen, Julia Hoffmaster and Mary Finnegan along with fourth-grader Remi VanDeusen — chose to work on a service project for this year’s DI challenge.

“They wanted to help children, so they chose to raise money for the Together We Rise program,” explained Hoplinks team manager Anne Vergnon.

Together We Rise is a nonprofit organization that helps children in foster care. One of the things the organization does is provide duffle bags called “sweet cases” — with blanket, teddy bear, coloring book, crayon and hygiene kit — for young foster children. After doing a social media blitz back in September, the students were able to raise close to $500, which enabled them to purchase 20 sweet cases. They then filled and decorated the bags and delivered them to the CASA Project in Worcester to be distributed to foster children.

“It was quite an experience for them,” Vergnon said of the team, of which three of the five members have been together for the past three years. “They have really grown from this.”

For the older students, DI has become more than just about solving a challenge in order to enter a competition, according to (AM)2 team manager Lisa Giusti.

“This program changes their life,” she said. “They will never look at a problem the same way again and will always approach it in a unique way.”

The team of Michael Giusti, Mihika Abraham, Akila Sanjay and Ananth Sanjay, all four of whom have been together for the past eight years, are described by their team manager as “critical thinkers.”

“They are not afraid to take on challenges and learn new skill sets,” she said. “These are skills sets they will be able to take with them forever.”

This year the (AM)2 team chose to tackle an engineering challenge. The challenge was to make a structure that was as light as possible that could hold as much weight as possible. The catch? The challenge also was to create a special effect that would be triggered by the weight placement.

After qualifying at the regional level in March for the state tournament, the team went on to win the top spot and qualify for the global championships for the second time. Details of the structure will be kept under wraps while the team prepares to compete against other teams from as far away as Qatar and China.

“When you first read the challenge, it looks like it is nearly impossible,” Giusti said. “But I have never heard them say, ‘This can’t be done.’ They always find a solution.”

As the trip to the global tournament can cost upward of $10,000 per team, the two groups are now fundraising to get to this prestigious event.

Those interested in helping the teams with travel expenses can visit their GoFundMe pages. 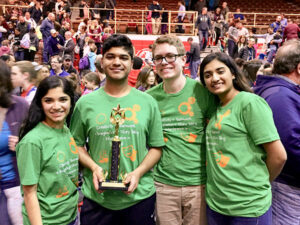 The (AM)2 team is made up of Hopkinton High School juniors Akila Sanjay, Ananth Sanjay, Michael Giusti and Mihika Abraham.