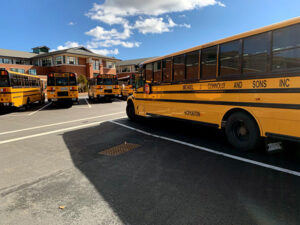 The district uses 29 buses to transport students to and from Hopkinton schools each day, at a cost of almost $1.8 million for the year.
PHOTO/JERRY SPAR

A group of Hopkinton Public School parents have expressed concern that the district has “put policy and operational procedure over children’s safety.”

During the Feb. 6 School Committee meeting, Hopkinton parent Margaret Post was the main spokesperson for approximately 30 parents who have had issues with bus transportation in the district.

“We came together out of a concern that this district’s decisions about bus stops, bus routes and appeals have put children’s safety at risk rather than using a sensible, respectful approach that engages families in the common-sense solutions,” she said, reading from a prepared statement.

Post told the Committee that the group was formed after a feeling of “extraordinary frustration” due to perceived lack of response from administration to address families’ concerns about transportation issues. She thanked the School Committee for taking time to listen and encouraging her to speak at the open meeting, but stressed that the transportation issue was not about enrollment numbers or the fact that 80 percent of Hopkinton residents live on rural roads.

Over the past four months, Post said that the group has met and even conducted a survey of a small sampling of parents, finding that some have concerns about students congregating in unsafe areas to wait for the bus or crossing streets that have no crosswalk — “often in the dark and during busy commuting times,” she said.

Post was not the only community member to voice a concern during public comments. Sue Creswell, grandparent to a student in the district, said that there are “significant” safety concerns when it comes to the district’s transportation policy.

“If policy is preventing our children from being safe, then it is time to change policy,” she said.

With almost 4,000 students to transport to and from school each day, the district has had to consolidate a number of bus stops over the past few years. Families can appeal their bus route via a form on the Hopkinton Public Schools website, but appeals are not reviewed until October.

“When those appeals were denied, we were not given reasons why,” Post said. “We felt excluded from the decision-making process.”

Appeals are reviewed by the superintendent, director of finance, school resource officer, bus dispatcher, and transportation coordinator before a decision is made on if a change to the bus stop is warranted. This school year a total of 53 appeals were filed, and 12 of them were approved while 41 were denied, according to superintendent Dr. Carol Cavanaugh. Last school year there were 57 appeals, of which 15 were approved.

Mapping out bus routes and stops for those buses is a complicated process, Cavanaugh said.

“We are a very large geographic footprint and have 3,916 students. That’s a lot of students to move across a lot of space,” she said of the 28.2 square miles that makes up Hopkinton.

The district is looking at increasing the bus pass rate from $155 per student to $200 next school year (with a family cap of $400), but that extra revenue would go toward offsetting operational budget increases, not in adding extra stops.

“We have three runs of 29 buses, there is not an awful lot of time [in between runs],” Cavanaugh said.

Several School Committee members expressed sympathy to the parents and guardians who voiced complaints but agreed that it was a complicated issue.

“We know there are safety concerns, and that is the hardest part, but we are still constrained with paying for all of this, too,” commented Jen Devlin. “We have to try and find a balance, there is no easy answer to the problem of transporting 4,000 kids.”

In the meantime, the School Committee Policy Subcommittee will be reviewing the transportation policy while the administration looks at shifting to a two-tier bus route by adjusting school start times slightly and working to make bus stop appeal forms more accessible on the website.

The overall transportation budget this year is $1,791,000. It’s due to increase to $2,024,000 next year, primarily due to contractual increases and the need for two additional buses to handle enrollment increases. The school is receiving a discount for housing the buses behind the high school in a bus lot that was constructed last summer. The transportation budget is 4 percent of the entire school budget.