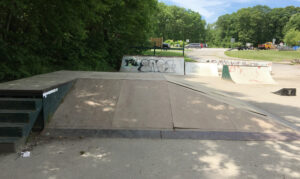 The old skate park at EMC Park fell into disrepair and had to be dismantled. FILE PHOTO/JERRY SPAR

The Parks & Recreation Department, during Monday’s Parks & Rec Commission meeting, discussed plans to push forward with the redevelopment of the skate park at EMC Park at a cost of $300,000.

There will be a meeting about the project “within the next 30 days,” according to Parks & Recreation Department coordinator Jennifer Hart.

The funding, obtained through the Community Preservation Committee (CPC), included money for a design study from Pillar Design Studios. The firm specializes in the design of skate parks. It recently designed one in Framingham and currently is working on a similar project in Worcester.

Hart said the next step in the process would be to get input from those who would be utilizing the skate park the most. The debate that arose was how much input was needed before the plan was presented to the public.

There was a concern about getting too much public input on the initial design, as it may be “opening a can of worms.” There may be so many suggestions that it would not be feasible to incorporate them all.

Commission member Liisa Jackson, who has been an avid skateboarder and skater for many years, initially advocated for more feedback from the skateboard community.

“As someone who would use a park like this, I think it would be good to have some design input on the specific ramps,” she said. “I’ve skated skate parks all over the country. I’ve been to skate parks that are pretty boring, and nobody ever hangs out there. If we’re going to spend money on it, let’s make it a really awesome skate park.”

Making sure that the park meets the needs of all skill levels and ages is another key, she added.

“I’m going to guess that if we put a survey out, we’re going to get a $1.5 million skate park,” chair Dan Terry said. “I don’t want people to be disappointed because we built one-fifth of the skate park that we had hoped for.”

One thing the skate park accomplishes is fulfilling a need for recreation that is more diverse and inclusive than some other organized sports, noted Parks & Rec director Jay Guelfi.

“When you think about youth recreation in town, you think about the traditional sports that most kids play,” he said. “Except for the 20 percent of those kids who are not into that stuff. They’re into the whole kind of alternate sports deal.”

The initial design “can be easily tweaked” to take suggestions from users, he added.

Because Sandy Beach will only have resident parking during the summer season, there was talk of raising the parking fees from Memorial Day to Labor Day, with input from the Police Department on the amount.

“I think that we need to be harsh for trailers that show up and do not have a sticker,” said commission member Cynthia Esthimer. “They are going to have to be turned away. We cannot sell them here because I think it would be difficult.”

The Lake Maspenock Preservation Association (LMPA) will have volunteers on hand for the two weeks preceding the season to facilitate the sale of parking passes, Esthimer said.

The day pass currently costs $10. A $50 or $60 fine was proposed to discourage overnight parking. The past two seasons the fine was $40. The issue will be voted on at the next meeting on March 17.

Esthimer also hoped to discourage a “launch and leave” attitude by some out-of-town boaters, who have someone stay on the craft while someone else leaves with the vehicle.

“I think it stings just enough to encourage them to purchase a pass,” Guelfi said.

“A big problem here is that after the lifeguard leaves, there are people who just park here overnight,” Esthimer added. Terry said that issue could be brought up for discussion at another meeting.

The fine for trailers previously had been raised from $100 to $200 to discourage parking on Lakeshore Drive.

Further down the line, Esthimer said, there may be discussions about installing a gate at Sandy Beach.

In other Parks & Rec news, Dave Daltorio, the town engineer, joined the meeting as the project manager for the long-awaited Main Street Corridor Project. While construction will start next week, one issue that has arisen is the need for crews to store equipment and materials. One option is the Marshall Avenue parking lot, adjacent to Carrigan Field, which for one year was used to store salt and sand for the town.

“The contractor is asking to park their vehicles as well as to store some of the pipes that will be used for drainage,” Daltorio explained. Other objects will be manhole covers and grates. A fence will be constructed around the materials.

The contractor already has received permission from the Select Board to use Marathon Way, adjacent to the Town Common, and bring on a second or third crew to expedite the project. It will save time for the transportation of materials.

“I’m really not comfortable about making a decision without input from residents of Marshall Avenue,” Terry said. “They’ve been great neighbors.”

A joint letter from multiple town departments explaining the need will be forthcoming. Residents will be invited to share their input at the March 17 meeting.

Regarding the planned dog park off Fruit Street, an update will be provided at the next meeting. There have been several bids received thus far, Guelfi said.