Summer programming through the town’s Parks & Recreation Department is near pre-pandemic levels after its first week, and it is expected to rise, director Jay Guelfi announced at the Parks & Recreation Commission’s meeting Wednesday evening.

The boys and girls basketball clinics are nearing capacity, with a few spots remaining. The track clinic is full. In addition, the non-contact football clinic was expanded to accommodate the demand.

“We are at just about back to pre-COVID levels for our playground groups,” Guelfi added. “What I think is going to happen is that typically, once we get through the first week and the word spreads that it’s fun, we’ll see another boost for Weeks 3 through 6.”

He added that program revenues are almost at pre-pandemic levels as well.

There was initial concern that families would not be as enthusiastic about allowing their kids to attend summer programs because of lingering concerns from the pandemic, he noted. However, registrations have swelled, which has allowed the department to hire 60 young adults to help with summer staffing.

Movies on the Common are resuming on Thursday nights, with “Frozen” the first flick to be shown. The series will run until Aug. 5, concluding with “Toy Story 4.”

Chair Dan Terry said the commission will analyze in September how well the summer program performed.

Guelfi said he would be meeting with a turf consultant this week to assess the condition of the turf at the athletic fields off Fruit Street prior to them undergoing a 12-point testing analysis.

“By the end of July, we will hopefully have the field groomed and tested and a plan to go forward,” Guelfi said.

The study, which should be ready in six weeks, will allow the commission to decide whether to go forward with renovations to the 12-year-old field.

“The other dynamic here is that, when we constructed this field originally, there were limited types of sub-surfaces available,” Terry pointed out. “What I think is a possibility is that the town will encourage us to go with a safer technology that has been developed in the past decade.”

He added that if the field were to need replacement, it likely would resemble the high school field, which is a couple of years old. The assessment will determine if the current field will be able to last with repairs or require a complete overhaul. Fields typically last 8-12 years.

The testing will determine the condition of the fibers and subsurface. The cost can’t be determined until the survey is complete, but the money likely will come from several sources, according to Guelfi.

In the meantime, there is a tear on the field that will be repaired.

Sandy Beach has been well utilized by residents so far since the institution of resident passes. The beach is open seven days a week from 10 a.m. to 5 p.m.

“We’ve exceeded our revenue goals, which is a good thing,” Guelfi said. He had expected a dip because of the loss of out-of-town residents. He attributed the success to the ability to purchase passes online, which brought in about 80 percent of the revenue.

The entry point, which is now at the parking lot rather than the beach entrance, caused confusion for some visitors, but it seems to be working out well overall.

“I think parents feel safe bringing their kids there, knowing that there are certified lifeguards,” he added, as there have been a spate of drownings around the state in the past two months.

Esthimer added that the Department of Public Works has done a great job keeping the beach clean.

The only issues are with a few residents either coming early to launch canoes or boats, or after 5 p.m. to ride jet skis or use the beach.

“We have to remember that people want to go there because it’s so nice,” Guelfi said.

The partnership between the commission’s subcommittee members and the Lake Maspenock Preservation Association has contributed to the beach’s success, Terry said, calling the effort “commendable.” 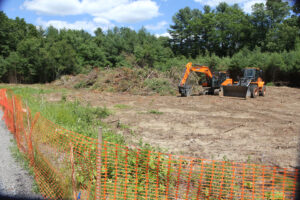 Work is underway on the dog park, Guelfi noted. The site has been graded and trees have been removed.

“It’s an exciting time in this process because you can start to see tangible things happening,” he said. The soil that was removed will be repurposed for the skate park at the EMC playground.

The Town Common fountain recently became clogged, Guelfi said. He plans on having an irrigation company run a diagnostic test on the entire system.

“I don’t want the Town Common to not be green,” he said.

The state of some of the older trees is another concern that will be discussed at upcoming meetings.