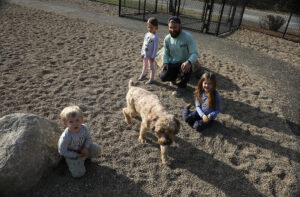 William Burke and his children, (from left) William, Charlotte and Savanah, play with their dog, Haven, at the town’s new dog park off Fruit Street on Thursday. PHOTO/JOHN CARDILLO

The new dog park is open and “being heavily used,” said Parks & Recreation Department Director Jay Guelfi. The park is “as done as it’s going to be until spring,” Guelfi noted, clarifying that a gazebo and two benches remain to be installed, and the water fountain is not yet in operation.

“If you haven’t been yet, I encourage you to go check it out,” Guelfi said. “Even if you don’t have a dog, check it out.”

The commission approved a request from the Cooper family to light a menorah for Hanukkah in the Town Common from Nov. 28 through Dec. 6. The group also approved a request from the Girl Scouts to host a tree lighting ceremony and perform carols on the Town Common on Dec. 4 from 3:30-6:30 p.m., following the Chamber of Commerce Holiday Stroll event in town.

Planning continues for the re-installation of a World War II memorial on the Town Common. “This is going to happen,” Guelfi said, “it’s just a matter of how long it’s going to take.”

Regarding the Fruit Street turf replacement project, Guelfi reported that the group will begin soliciting bids, contingent upon Town Meeting approval of the project, with the intention that work begins in July.

Going into the winter season, the Fruit Street grass field will receive one additional seed application before the facility is wrapped up for the year. The plumbing will be winterized after the high school finishes its season.

The commission reviewed a draft of the Fiscal Year 2023 budget, which includes increased spending for staff salaries, repair, maintenance, equipment and electricity. Increased staff compensation costs were attributed largely to the expanded season at Sandy Beach, as well as standard merit increases and the minimum wage increase.

Other increases were attributed to projects on the Town Common, new playground wood chips, rising energy costs and general expansion of the department. The commission voted to allow Guelfi to present the budget proposal to the town’s Finance Department.