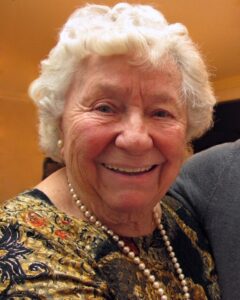 Patricia Lee (Donahue) Todd, 97, of Exeter, New Hampshire, and formerly of Hopkinton, passed away March 3, surrounded by her loving family, at Langdon Place of Exeter.

Patricia graduated from Queens College in New York and considered herself to be a “city girl,” but George brought his new wife to New England and she never looked back. She loved her role as a housewife, and she assisted George in running their construction business in Natick. She was most proud of being a mother and she devoted her life to her five children. She was active in the PTA, Girl Scouts, Boy Scouts and Women’s Club. Patricia loved all the family time spent at Sebago Lake in Maine, and as the grandchildren came along, she loved seeing her family stay so close together every summer on Ring Island. Patricia had been active and healthy up until recently. She will best be remembered for her loving kindness to everyone she met and for her energetic personality.

She is survived by her five children, Janet Gabrielli and her husband, Vincent, of Gold Canyon, Arizona; Susan Brusa and her husband, Robert, of Portsmouth, New Hampshire; Roberta Trombley of Thompson, Connecticut; Jeffrey Todd and his wife, Carolyn, of Durham, New Hampshire; and Michael Todd and his wife, Susan, of Newfields, New Hampshire. She also leaves 13 cherished grandchildren, 19 great-grandchildren and two great-great-grandchildren. The family would like to thank the nurses and numerous staff members at Langdon Place who cared for our mom. Many thanks to the specialists and physicians in the Exeter area who showed such compassion and truly cared about her and enjoyed her “spunk.”

Graveside services with family and friends were held on March 15 at the Mount Auburn Cemetery in Hopkinton, followed by a memorial service at Faith Community Church. In lieu of flowers, donations may be made in her memory to the American Diabetes Association, P.O. Box 15829, Arlington, VA 22215 or diabetes.org. Arrangements were under the care of the Chesmore Funeral Home of Hopkinton (ChesmoreFuneralHome.com).