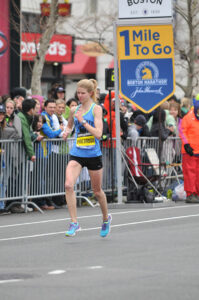 Hopkinton native Lauren Philbrook already has qualified for the 2020 U.S. Olympic marathon trials, and she hopes to better her qualifying time in this year’s Boston Marathon.

When Lauren Philbrook was a little girl growing up in Hopkinton, she would watch the beginning of the Boston Marathon and saw it as a truly happy event. Now, as an adult and an accomplished marathon runner, she’s come to learn the smiles seen during the first few steps often turn to grimaces of determination while heading up Heartbreak Hill.

Philbrook, 31, will experience both once again this Patriots’ Day as she runs her sixth Boston Marathon.

“It still feels kind of surreal in some ways because I spent so many years watching from the sidelines, I still can’t believe sometimes I am one of the runners in it,” she said. “Hopkinton is where you’re the most excited, you’re just starting, going downhill. I never knew as a child how miserable people get because I only saw the very beginning when everyone looks so happy.”

Philbrook has qualified for the U.S. Olympic marathon trials three times, running before the 2012 and 2016 games. She already has qualified for the 2020 trials, but first she hopes to shave a few minutes off of her qualifying time in her latest Boston run. Her best finish at Boston was 16th place in 2015. Her best time was 2 hours, 38 minutes back in 2017.

“It would be great to place better than my seed and run an evenly paced race,” Philbrook said. “In some of them it’s been a struggle the second half up Heartbreak Hill.”

The Hopkinton native will have some challenges this year. Due to some injuries, she has not competed in a marathon in more than a year. She also is running after taking a new job as a psychology professor at Colgate University, meaning she had to train in cold, snowy upstate New York.

“I am a little nervous to see what shape I am in after this winter,” Philbrook said. “I did more treadmill workouts than I have ever done before, and I there were a couple of times outside when I was racing a snowstorm.”

Long before landing her new gig in Hamilton, New York, Philbrook’s love for running started on roads near the one where she and thousands of others will start on April 15. She competed with the Hopkinton High School team from 2000 until 2005 before continuing her running career at Williams College. She credits her time with the Hillers under coach Michael Scanlon with helping her meet some of her closest friends and explore her hometown on training runs.

Philbrook certainly will have a hometown advantage. Her sister, Alison, and mother, Linda, will be at the starting line, and she plans to see her father, Dana, frequently as he bikes to various points along the course. Philbrook said she probably will see her father at three spots in the first half of the race and then again riding up the side of Heartbreak Hill.

It will all add to a special experience for the hometown girl turned elite runner.

“It’s my favorite marathon by far,” Philbrook said. “It’s very special for me with the history of the course, but the fact that I grew up here just adds a lot of meaning.”