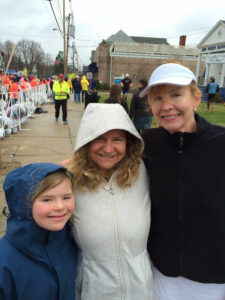 Denver’s Kimberly Searfoorce (right) will again run the Boston Marathon to raise funds for the Michael Carter Lisnow Respite Center, inspired by her close friend Molly Myers (middle) and Molly’s daughter, Riley (left), who live in Hopkinton and rely on the center.

There is a bond among high school friends that, for those who are lucky enough, endures well into adulthood. Kimberly Searfoorce and Hopkinton resident Molly Myers understand that bond all too well as the two have been there for each other since their teens. That unyielding friendship will be evident on April 15 as Searfoorce runs the Boston Marathon to support a local organization that has meant the world to Myers and her family.

For the third time, Searfoorce, who resides in Denver, is running the 26.2 miles to benefit the Michael Carter Lisnow Respite Center, a Hopkinton facility that has brought a sense of comfort, belonging and support to Myers’ daughter, Riley.

Riley was born with Down syndrome and first came to know to the respite center as an infant. Over the years, the center became like a second home to Riley where she flourished and enjoyed outings and sleepovers and formed lifelong friendships of her own, much like the one her mom and Searfoorce still have to this day.

Molly and Kimberly met their junior year in high school while both were living in Colorado and remain best of friends. They’ve seen each other through the highs and lows of everything from graduations and new jobs to the birth of children and divorce. Even though they are separated by thousands of miles, it’s apparent the two women see each other as family.

“Molly is one of the most tenacious and loyal people that you can meet,” Searfoorce said. “To have her on your side is to have a one-person army at the ready.”

Kimberly stood by her friend’s side when Molly married Kevin Myers and was thrilled for the couple when they welcomed Riley in 2000. Not long after that, the Myers family discovered the Michael Carter Lisnow Respite Center and their world changed.

“As soon as I walked through those doors, it just gave me hope and a sense of comfort that Riley would belong somewhere in the world,” Molly said. “She thrived there and I had so much trust in the staff that I was able to let go a little. It’s respite in every sense of the word.”

Searfoorce, too, said she was amazed when she first came to know the respite center and what it did for Riley, who graduated from high school last year. Consequently, she and Riley have formed a tight bond.

“She’s a really dynamic girl, very smart, very sweet and also very in charge. Whatever she sets her mind on to do, she does,” Searfoorce said.

So, while it should come as no surprise to Myers that her best friend is again running the marathon to benefit the respite center, the thought of that generosity still makes her emotional.

“For Kimberly to run for the respite center — it’s just amazing,” Myers said while tearing up. “She would do anything for anyone. I have the most supportive friends, family and community and I truly realize that.”

Searfoorce said for her the run is about “love and friendship and so is the respite center. And more than anything, so are Riley and Molly.”

The Michael Carter Lisnow Respite Center provides multiple services to children and adults with disabilities. To support Kimberly’s fundraising efforts visit www.hopkintonrespite.com and click on Fundraisers/Boston Marathon. All donations go directly to the respite center’s scholarship fund for those families that couldn’t otherwise afford its services.