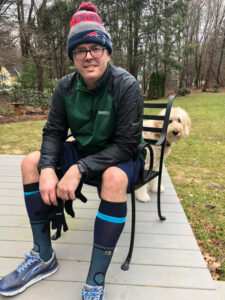 Having been inspired his whole life by the runners and the community’s enthusiasm around the Boston Marathon each April, Chris Hart decided this was the year he would run as well.

“Patriots’ Day has found me watching from the starting line or cheering runners on at the finish in Kenmore Square after a morning Red Sox game,” Hart said. “I’ve tried to get in shape to run before, but this year I turned 50 and decided to get serious.”

There used to be an inner voice telling Hart this was an impossible feat.

He’s started running several times before. Patriots’ Day would inspire him to begin running. He’d run the Timlin 5K in Hopkinton in June, then get busy over the summer with other activities and be back to square one around Labor Day.

This past summer, however, he cut out several of his extracurricular activities — competitive BBQ competitions and writing cookbooks, to name two of his favorite hobbies — and kept to his running schedule.

Around September, he found that he could run 8-10 miles on his long-run days and still was feeling pretty good.

“This time the inner voice said something different,” Hart noted. “It said, ‘You could run Boston.’ ”

Hart was able to secure a bib number from a local nonprofit, eHop, and is the sole runner for that organization.

Founded in 2007, eHop is run by residents for residents. Its mission is to provide timely and factual information about key town matters with the goal of increasing government transparency and fostering civic engagement by empowering Hopkinton voters to make informed choices.

“We see ourselves as a communications bridge between town government and residents,” eHop president Nanda Barker-Hook explained. “Chris has promised that once he reaches his $5,000 fundraising goal, he will personally donate an additional $1,000. We never expected such a generous offer, but the money Chris raises will have a significant impact on our ability to expand the work we do.”

To get in shape, Hart has been following the Boston Athletic Association’s training program since mid-December, setting weekly running goals. Over the last year, he has made some changes in his diet, cut down on his beer intake and lost 40 pounds. Training for the Boston Marathon has been part of his success.

His weekly training schedule includes four days of tempo runs (3-10 miles each) or interval training (a combination of running and walking), a day of yoga, a day of rest and then an increasingly longer run of 10-20 miles each Sunday.

What he used to think unattainable now seems doable. His mantra is, “Just do today well.” With that as his focus, Hart pushes himself a little further every week, despite the minor aches and pains.

“I’ve learned the difference between motivation and commitment,” Hart explained. “On those cold, wintry mornings when it was 10-15 degrees outside and I didn’t want to get out of bed, I realized there are people counting on me, and that has made all the difference.”

Hart admits he’s learning the hard way and has made some mistakes in the process, but he now realizes how important it is to eat well, stay hydrated and get plenty of sleep each night. Nothing fancy — just taking good care of himself.

Folks at PR Running in Westborough have helped him select running shoes (he has four pairs) and equipment. He favors the Hoka ONEONE brand because of the extra cushioning. He’s been running in all kinds of weather but is hoping the extended forecast of “55 degrees and cloudy” for Marathon Monday will become a reality.

In preparation for handling the hills, he’s run most of the 26.2-mile marathon course twice now. Several running friends have offered him good advice. Don’t go out too fast. Pace yourself. Be sure to listen to your body.

“I can’t wait for race day,” Hart said with a grin. “This year I want to be able to say that I’ve done everything possible to do my best. I will be one of the racers toeing up to the start line. It’s thrilling.”

Wearing bib number 28984, Hart is determined to finish the run in under five hours.

His wife, Jenny, and their two children, Ethan and Jaimie, will cheer him on at the start line and watch him head into Kenmore Square for the finish. Colleagues from his job as a software developer in Westborough will cheer him on over Heartbreak Hill.

If you’d like to support Chris Hart and eHop, visit his GoFundMe page at gofundme.com/chris-hart039s-and-ehop-2019-boston-marathon-run and donate online.