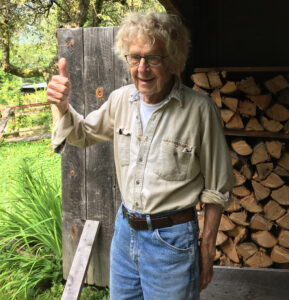 As he closes in on his 100th birthday, Russ Phipps says there are no secrets to his longevity.

“I just take whatever comes,” he says. “You have to roll with the punches. That’s the way it goes.”

His daughter, Marcie Caporizzo, says her father was “born 100 years too late. He is a fan of simple living and enjoys living like the good ole days of pioneering.”

In fact, after he returned from World War II to his wife and baby son, also named Russ (and now his next-door neighbor), Phipps and his family lived for a few months in a tent he put up on a friend’s farmland in Natick. When the nights starting getting too cold, they moved into apartments in Framingham that were reserved for veterans.

Eventually he found approximately 14 acres of land in Hopkinton that he purchased for about $300. For another $500, he purchased materials to build a house and install a well.

A proponent of open space, Phipps recently donated about half of his land to the town, and it can be accessed via the Cameron Woods trail off Wood Street.

An engineer by trade, Phipps now spends most of his time working in his sawmill and enjoying the outdoors. He’s not a fan of modern technology, especially television and computers.

“The electronic world to me is a sad bore,” he says. “It’s terrible for old folks. For one thing, I have trouble with my hearing, even with hearing aids. And the programs that they put on, they’re very — to me — uninteresting, and too mixed up in politics.” 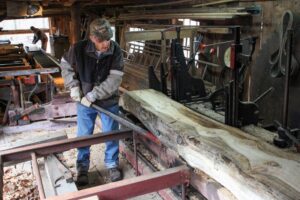 Russ Phipps continues to work in the sawmill he constructed on his property on Winter Street. PHOTO/JOHN CARDILLO

Born in Framingham in 1921 to parents of Swedish and English descent, Phipps remembers traveling to Hopkinton to visit his aunt, uncle and two cousins, who lived on Summer Street (off Main Street, in the center of town).

When World War II started, he and his best friend, Howard Severson, tried to enlist in the Air Force. Phipps had an issue with one of his eyes, so he was not selected. But because he was an expert shot — having honed his skills during hunting trips to Maine — he was made an artillery instructor and sent to Colorado to train others.

Meanwhile, Phipps married Severson’s sister, Doris in 1944. Severson could not attend the wedding, as he was based in North Africa, serving as a navigator on B-24 bombing missions. In his last letter to Phipps, Severson expressed concern for his safety. “He knew they were in a horrible situation,” Phipps recalls. Severson’s premonition was unfortunately accurate, as he died in an ensuing mission, with his body eventually recovered in Yugoslavia.

Phipps eventually was sent out to the Pacific Ocean island of Tinian. There he worked on the Enola Gay, the plane that would drop one of the atomic bombs on Japan in August 1945, leading to the end of the war soon after.

“We didn’t know what the hell was going on,” Phipps says of the mission, details of which were kept secret from most on the island. “I had a chance to go out there and look [the plane] over one day, and I didn’t take any pictures, but I did get followed up later in life by the FBI to find out if I had any information.”

Phipps recalls with sadness the sinking of the USS Indianapolis, which delivered key components of the bomb to Tinian and, a few days after leaving, was sunk by a Japanese torpedo. Due in part to the mission being a secret, many of the crew members died in the water before help arrived almost four days later.

“There was terrible, long suffering before they found them,” Phipps says of the 316 survivors. It was estimated that 900 of the 1,200 on board initially survived the sinking, but hundreds died from a variety of causes, including salt poisoning, dehydration and shark attacks.

Phipps had his own brush with death while flying.

“We almost had to ditch one time in the Gulf of Mexico one day,” he recalls. “We were lined up with all the provisions for the crash, but we made it.”

Phipps was stationed in Florida when he purchased a motorcycle that had been handed down from GIs to each other. Motorcycling eventually became a passion for Phipps, who would ride — with his wife sharing the seat — thousands of miles.

“Doris and I did an awful lot of motorcycling down in the Big Bend in Texas,” Phipps recalls, referring to the national park in the southwest part of the state. “It’s beautiful country. No cars to worry about. Beautiful scenery for miles and miles. The weather is usually pretty good. We became acquainted with three ranchers, and we stayed with those folks over the winter.”

Added Phipps: “We explored miles and miles of any scenic back roads we could try, we’d take them.”

Eventually the family settled in Hopkinton, purchasing land from Clarence Farrar. The land was 13.7 acres, although Phipps wasn’t sure where the property ended when he bought it.

“I really didn’t know where the boundary lines were,” he recalls. “Clarence didn’t want to bother surveying. He said if you want the land, you can have the whole thing.”

Phipps also didn’t know much about the town when he first settled here.

“Hopkinton didn’t mean much to us at all,” Phipps said. “I knew the Town Hall was there [on Main Street]. I learned that Woodville was part of Hopkinton.

“When we first moved in here I met Herman Larter, he was a local woodcutter, and they had a farm in Woodville. He and I would sit down and talk after we’d worked all day. I bring in loads of slabs and dump them in the pasture, and he’d use them, cut them up for kindling wood for people he’d sell firewood to. He and I would swap stories.”

Phipps also recalls Ora Cheney, who lived in the Bear Hill section of town, near the Upton line.

“Ora Cheney was rather a character,” Phipps says. “He had a lot of knowledge about this area. He and his father, Harry, they had done a lot of research on Indian lore. All kinds of Indian artifacts. They had put up a low building across the road from the little house they had there on School Street. In there they had counter spaces and aisles around it, and you could walk around and see piles of Indian lore they had collected, from where I don’t know.”

The family grew with the arrival of Marcie, the couple’s second child. For fun, they would swim and fish and boat on Lake Whitehall, which is across the street from their house.

“We spent lots of time on Lake Whitehall,” Phipps says. “Whitehall was more of a wild, free lake. They didn’t have any state connection to it as far as boat landings or rules and regulations and whatever else. But they had to have something, we understand that, otherwise it would be overrun with too many big boats and stuff.”

Doris passed away in 2015, one day after the couple’s 71st wedding anniversary. Phipps continues to regularly see his two children, who are helping to plan his 100th birthday celebration. With COVID preventing a large in-person celebration, the family instead is hoping to receive 100 birthday cards for Phipps’ 100th (cards can be mailed to 89 Winter Street, Hopkinton).

His daughter says her father does not call attention to himself but is deserving of recognition.

“He’s a quiet man who listens intently and is reserved in offering an opinion on anything unless it has to do with patriotism and love of America,” she says. “Anyone who meets him always goes away a friend. He’s one of the smartest men I have ever known, but one of the most humble. He’ll always end a visit with, ‘You all come back now.’ ”